We have included quite some features we originally introduced with Vienna Instruments PRO to this new face-lifted incarnation of our standard sample player, making it more powerful and economic at the same time; but most of all, it brings the technology “under the hood” to a whole new level.

Auto Cell Naming provides both automatic and manual naming of Matrix cells, so you get an instant visual feedback of the available and performed articulations. Dragging a new patch into a cell or a slot will automatically give the cell a more descriptive name. 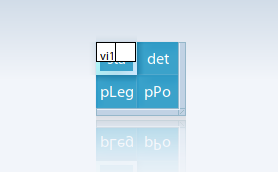 Reduced memory usage per instance, optimized voice sharing between all instances and enhanced GUI performance have been implemented by our developer team.

Colored Key-switches are now also visible on your virtual keyboard, just as the key-range!

Take advantage of MIRx, the Reverb Mixing Extension for Vienna Instruments PRO, available as a separate product. We have positioned our instruments in the perfect sonic surrounding, making it easier than ever to get both balance and positioning of your virtual orchestra perfectly right!More details and setup instructions in the separate short manual in MyDownloads!

Use Vienna Instruments as a standalone software or VST/AU/AAX plug-in, 32-bit and 64-bit. Vienna Ensemble, installed alongside Vienna Instruments now, can also be used as a VST3 plug-in. This manual presents all new elements integrated in Vienna Instruments on a technical level and is designed to be your reference guide in addition to the many video tutorials you will find online.

The main object was to get a tool which could handle not only all the articulations, but also our special Interval and Repetition Performances without the user having to take care about delay compensation, octave offset, and such things. Moreover, you should be able to use one MIDI track per instrument – after all, a violinist doesn’t have to switch to another fiddle to play legato, either.
The first problem was solved by implementing performance detection algorithms on the Patch level. It doesn’t matter now whether you’re using single notes with or without alternating capabilities, legatos, or repetitions; it's load and play. Vienna Instruments takes care of numbers and calculations because the Patches communicate their requirements or "rules" to the player.
Patches are fine, but how to combine them? The decision was in favor of a Matrix approach. A Matrix is a two-dimensional (in this case) array of cells in which Patches can be stored. Every Patch in the Matrix has its distinct position defined by its horizontal and vertical Cell count, so that each Patch/Cell can be called up by a combination of two controllers. You can build up and streamline your own Matrices to fit your needs.
But there still was one more step to go, because in spite of its ability to command up to 144 Patches, a Matrix only has those two controllers – and one might need different controllers for special tasks. For example, our new speed control algorithm is good for switching between different repetition articulations but doesn’t make much sense when you simply want to change from vibrato to a non-vibrato articulation... So the third, and highest level of instrument integration is the Preset, where you can combine Matrices and activate them via keyswitches. A Preset can hold 12 Matrices. That alone would make 1728 articulations available to a single MIDI track – if there weren’t some other goodies you’ll learn about presently.

Vienna Ensemble PRO incorporates the first all-in-one MIDI and audio LAN solution that works universally on Macs and PCs. All you need to integrate a slave computer over LAN is a working Gigabit connection, no soundcard or MIDI Interface is needed on your Vienna Ensemble Slave Computer!

Vienna Instruments PRO opens up new dimensions for the art of virtual orchestration! With innovations like Humanize, Enveloped Time Stretching and our APP Sequencer you are entering a new level of virtual rality, with all the little details that make music what it is.
And we have even more in store for you!
Get a free Demo version of new Vienna Software.