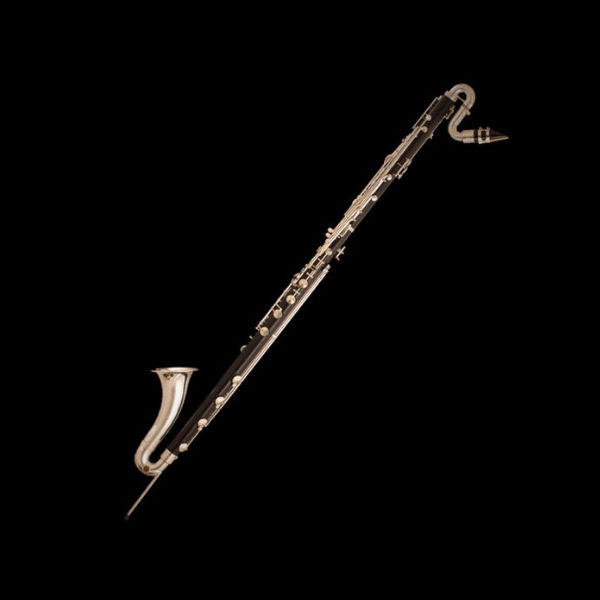 As is evident from the name, the bass clarinet is the bass instrument of the clarinet family.

The bass clarinet is not only an established member of the full orchestra but also of clarinet orchestras and military bands. In addition, it is now also found in chamber music ensembles.

Low-pitched wind instruments with a single reed were already known in Europe in Renaissance times: The chalumeau - the direct precursor of the clarinet - was made in various pitches, the instrument family also including a bass chalumeau. Chalumeaus were in use until about the end of the 17th century and were only played in the lower register (the clarinet's low register is still called the chalumeau register today); they did not have a speaker key for playing the high notes (clarinet register). The bass chalumeau was made in the form of a bassoon so that all the finger-holes could be placed within easy reach of the musician's fingers.

In the late 18th century two instrument makers began developing clarinets in the bass register at roughly the same time and independently of one another.

In Paris in 1772 Gilles Lot created a clarinet with several keys and a compass of more than three octaves, which he called a ”basse-tube”.

And in the Dresden workshop of Heinrich Grenser in 1793 a bass clarinet (”Klarinettenbass”) was produced with nine keys and a range down to a written Bb3 (which meant that the lowest sounding note was either Ab4 or Ab3). This instrument and a second bass clarinet from 1795, both pitched to Bb, have survived to the present day. Like the bass chalumeau they have the form of a bassoon. The tubing is very thick, similar to the bassoon's wing joint, which made it possible to drill the tone holes in the wall at an angle so that they were easily reachable.

At the beginning of the 19th century many workshops were producing a variety of different models with colorful names: in Paris in 1807 Dumas made a bass clarinet that he called a ”basse guerrière”, which, to judge by the name, was intended for military bands. This instrument was later improved by Louis Auguste Buffet. Then in 1812 came the so-called ”basse-orgue” made by François Sautermeister in Lyon; in 1828 it was followed by the bass clarinet of G. Streitwolf in Göttingen; and in 1838 C. Catterini in Padua and P. Maino in Milan came up with the ”glicibarifono”.

The man credited with pioneering the modern straight form of the bass clarinet is Adolphe Sax (1814-1894), who created a version with 22 keys and an entirely straight tube in the 1830s. He also added a reflector which was designed to conduct the vibrations from the downward-pointing bell into the auditorium.

The bass clarinet in the orchestra

In 1836 Giacomo Meyerbeer scored for a bass clarinet in his opera Les Huguenots, entrusting it with solo tasks. This important role greatly increased the bass clarinet's popularity and paved the way for further use in art music.

Like the clarinet, bass clarinets for the orchestra were now also made in Bb and A; many earlier models had been in C because the instrument had originally been used in military bands purely as a bass instrument instead of the bassoon, which was also pitched in C.

Franz Liszt and Richard Wagner were among the first composers to make regular use of the bass clarinet, raising it to the status of a standard orchestra instrument. Since Wagner it has regularly been given tonal tasks to perform beside its function as a bass voice: it is ideally suited for solos with a somber and solemn character, although it is also perfectly capable of producing humorous and comical effects. Richard Strauss requires as much agility of it as he does of the clarinet itself. He not only took the bass clarinet of his time to its lowest limit (the lowest note on an A instrument was a sounding C#), but also took it up to the highest register (highest note F5) for the first time.

Modern models now have a range from Bb1-B5 (sounding), but these extremes are hardly ever used by composers, partly due to a lack of interest in the highest notes, partly due to uncertainty as to which instruments are available and how far down their compass reaches.

A spike is usually attached to the bell so that the instrument can be rested on the floor during playing. If the musician plays standing up, it is held by a strap.

Nowadays music for the bass clarinet in Bb is written in treble clef. The sound is a major ninth lower than written.

Other types of notation

In the past other types of notation were used instead of French notation.

The highest notes are written in treble clef; the sound is also a major second (minor third) lower than written. Richard Wagner and Richard Strauss use this type of notation.

Modern bass clarinets in Bb have a range of Bb1 - B5.

The compass is roughly the same as the bassoon's and an octave below that of the Bb clarinet (D3-Bb6).

Compared to the ambitus of the bass clarinet in Bb usual in Berlioz's day (D2-F5) the modern instrument with its four additional keys reaches a third lower; the keys correspond to the four notes Db2-Bb1 (sounding). However, models are still made with a lowest note of C2 or Db2.

Until the end of the 19th century the bass clarinet was used primarily for bass tasks only; the high notes were only seldom required and ended at F5.

Although the notes Bb5 and B5 are playable they are not asked for in orchestra literature.

Sound is produced according to the same principles as on the clarinet in Bb:

To play, the reed is placed on the lower lip, which is pressed against the lower teeth while the upper teeth grip the mouthpiece on the closed side. When blowing the clarinet, the reed is controlled and set in motion by means of lip pressure, air pressure and the points of contact between the reed and the lower lip. The vibrating reed sends little puffs of air into the air column inside the instrument, thus causing the air column to vibrate.

The Bb clarinet has a compass down to a written E3 (sounding D3). On the modern bass clarinet this range is extended downward thanks to four additional keys, so that a sounding Db3, C3, B2 and Bb2 can be played. In 20th century literature the lowest notes are asked for time and again, especially in Russian music, e.g., in Sergei Prokofiev's Romeo and Juliet.

Unlike the higher-pitched clarinets, the bass clarinet (and the basset horn) have two speaker keys. The second speaker key means that the tone hole for the written Bb3 need not be used for overblowing or opened for all the high notes above the written B4.

The bass clarinet is generally played in the sitting position with the spike resting on the floor. If the clarinetist plays standing up it is held on a strap, like the saxophone.

In principle the same playing techniques are possible on the bass clarinet as on the clarinet; this level of agility has been required of the larger instrument at least since the end of the 19th century (Richard Strauss). Response is a little slower, however, owing to its size. Legatos can be performed smoothly and at fast tempos.

Using single tonguing, sixteenth notes can be played up to about MM 150.

Fast sequences of notes played staccato are possible in the upper register, in the lower register staccato sequences are not possible at the same speed as on the Bb clarinet.

Microtonal periodic fluctuations in pitch and/or volume which are produced by movements of the diaphragm, larynx and lips.

Double and triple tonguing are hard to perform because the articulation is hindered by the reed. For this reason these techniques are rarely used.

The clarinetist articulates a lingual R (produced with the tip of the tongue) or a rolled (guttural) R against the palate.

The slower the articulation, the softer the sound. In principle this technique can be performed over the entire range.

Trills can be performed throughout the whole compass.

In principle the same modern playing techniques are possible on the bass clarinet as on the clarinet, though with certain limitations, especially in the low register. Modern effects are not usual in orchestral literature but occur mainly in chamber music or solo performance (or in a mixture of clarinet and electronics).

Multiphonics: the low notes are extremely well suited for the production of multiphonics, because they contain a large number of partials and can be amplified.

The bass clarinet sounds much softer than the bassoon, especially at piano levels.

Its dynamic spectrum is impressive: as on the clarinet, a ppp can be played, which fades away to nothing. This is why the solo passage for bassoon in the 1st movement of Tchaikovsky's 6th Symphony, which asks for a ppppp, is often played by the bass clarinet.

Registers of the Bb clarinet (sounds as written)

Notes in the chalumeau register sound dark, mellow, sonorous and insistent and are favored particularly for serene and solemn passages. The lowest notes up to A2 have an especially dark and somber timbre.

As on the clarinet the middle register lacks overtones. Compared to the other registers the notes sound weak and dull.

These bright, powerful, full-sounding and brilliant notes are often used as a middle voice in the orchestra. These pitches correspond to the weak sounding register of the Bb clarinet (E4-Ab4) and can be played with far more brilliance and substance by the bass clarinet.

The highest notes sound narrow, incisive and penetrating by comparison. They are hardly ever asked for in orchestra literature.

The bass clarinet performs bass tasks in the orchestra and is combined with all the other bass instruments to fulfill this role. The characteristics of the low notes mean they are also used to play eloquent, solemn and emotive solos at moderate tempos. The full-sounding upper register is very well suited to thematic tasks (middle voices).

Bass clarinet + clarinet sound very homogeneous when played together, either in chords or with the bass clarinet an octave lower.

Of the brass, the French horn is especially well suited for combinations with the bass clarinet; both instruments have a substantial and mellow sound, a high degree of blending is possible.

Bass clarinet and cellos in unison is a combination found in a great many scores which produces a particularly soft overall sound.

The bass clarinet in its low register can also play in unison with the double-basses. The sound is then very dark and rumbling.

Full-sounding combinations, especially at piano levels, are also possible with the harp.

Bass clarinet in the orchestra