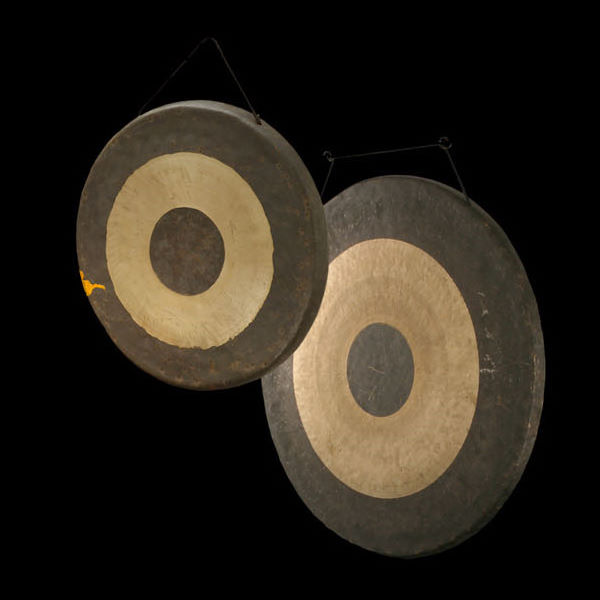 Along with the timpani and the bass drum the tam-tam provides the bass in the percussion group. The tam-tam is often confused with the gong, but there are a number of significant differences between the construction and sound of the two instruments: the tam-tam is a relatively flat disc and, unlike the gong, has no knob in the center. Apart from this it has no definite pitch, although the pitch of different sized tam-tams does vary, of course.

In western-style symphony orchestras the tam-tam has only been in use since the end of the 18th century. In the 19th century Romantic composers used the tam-tam more and more frequently, so that it became established as an orchestra instrument at the turn of the 20th century. In music of very recent times it has even been used as a solo instrument.

The tam-tam is struck with a variety of mallets, and depending on the mallet and the playing technique has a timbre ranging from dark to screeching to majestic.

The name tam-tam is derived from the Malaysian word tammittam, an onomatopoeic term for “drum”. Musical metal discs (gongs) originated in China in the 7th century BC. From there they spread to eastern Asia. In the Far East, gamelan orchestras in which whole groups of musical metal discs (tam-tams, gongs etc) played a vital role have been formed from time immemorial. This explains the enormous significance of these instruments in the Far East.

The metal disc from East Asia was originally used in religious worship. Later on the term tam-tam was applied to the modern orchestra instrument which probably came to Europe in the wake of the Turkish wars in the 17th century and was introduced into the orchestra toward the end of the 18th century in François Joseph Gossec's funeral march in Mirabeau (1791).

Until the end of the 19th century the tam-tam's role was to provide effects for important and notable cues, often in funeral marches. Since the beginning of the 20th century the tam-tam has finally established itself as a “true” orchestra instrument whose task is to lend the sound of the orchestra a darker timbre, as in Richard Strauss for example. It is therefore a very important and versatile member of the percussion group in the orchestra.

From about 1960 the tam-tam has been struck, rubbed or played with a huge variety of objects. It was first used as a solo instrument by Karlheinz Stockhausen in his work Mikrophonie I (1964).

The tam-tam is a round, slightly convex disc. The narrow rim is turned up and likewise convex. The instrument is made either of hammered sheet bronze or cast bronze using a special alloy. The highest quality instruments come from the countries in which the tam-tam originated: China, Japan, Myanmar, Java etc. So that it can be suspended the instrument has two holes in the rim through which twine or wire is passed. These holes must be drilled in places that do not vibrate.

The cast bronze tam-tam, which is used mostly for orchestral playing, has a fairly high fundamental in relation to its mass; to compensate for this and to achieve the tam-tam sound required for the orchestra, it has to be a certain size (about 70 cm in diameter).

One or more tam-tams are suspended on a metal or aluminum stand which is usually on wheels.

Special mallets are generally used for the tam-tam:

A superball has a shaft made of wood or rattan which is the same length as a marimba or vibraphone mallet's shaft. Its head is a rubber ball and it comes in a variety of sizes.

Smaller mallets do not generate the lowest partials (depending on the size of the tam-tam), but are all the more suitable for effects.

As a rule notation for the tam-tam is written alone on a single line. However, it can also be written together with the side drum, bass drum, cymbals, triangle etc. on the staff with no clef.

The score must always make it clear what size tam-tam the composer requires. The decay time should also be indicated.

The tam-tam is either struck or rubbed (or “stroked”).

The instrument is not struck exactly in the middle but about a hand-width (depending on the size of the disc) from the center, since it is at this point that the greatest volume and the lowest notes are produced. The ideal striking spot varies from instrument to instrument however, and the percussionist must locate it by trial and error, because missing it even by only a few centimeters can radically change the sound.

Like the gong, the tam-tam vibrates most in the center and least at the rim. It is for this reason that it is suspended by the turned-up rim. The sound contains a great many inharmonic partials.

The tam-tam is struck with a number of different mallets, usually with special tam-tam mallets. The larger and heavier the instrument, the larger the mallets must be and the greater the force that the percussionist must expend to produce a full-sounding tone.

In addition, notes take longer to develop fully on larger tam-tams and the overall pitch is lower. It is also harder to damp a large tam-tam. In fact, very large instruments at high volume levels require two percussionists to damp them.

Judging the attack for a piano tone is difficult and it is very hard to control the dynamic level.

The tam-tam is struck with various types of mallet.

The decay of a notated whole note or of a tied note is not usually damped. If eighth, quarter or half notes are written without a tie the instrument is damped with the hand as indicated by the note value.

Occasionally the tam-tam is “warmed up” in preparation for a fortissimo note; the percussionist strikes the tam-tam lightly so that it is already vibrating when the actual note is struck. This enables the tone to build up more quickly.

The tam-tam is damped by the percussionist's hand (small tam-tam) or body (large tam-tam) immediately after it has been struck. This is done to prevent the sound from developing fully and results in a dry, dull, metallic sound.

The large tam-tam is struck with two mallets of the same type in such a way that they do not damp the instrument's vibrations. The frequency of the mallet strokes is therefore relatively low. The merging of individual tones is easiest to achieve with soft mallets, although harder mallets and even wood mallets are also used when a particular tone is desired.

A small tam-tam is struck with a similar frequency to a suspended cymbal (i.e. higher than a large tam-tam).

At the beginning of a roll the frequency of strokes is marginally higher than in the roll itself so that the sound can develop very quickly.

Repetitions with and without accents are possible up to roll speed, although the build-up of sound quickly drowns the sound of the individual beats. This means that tonally there is no difference from the roll once a particular tempo has been reached. The tam-tam's large mass makes smooth and even playing extremely difficult.

Scraping with a triangle stick.

Stroking with a superball.

A tam-tam (usually up to 60 cm in diameter) is struck and dipped up to about the middle in a large tub of water. This lowers the pitch (glissando to about a fifth) and makes the tone quieter.

This glissando effect can be reversed by striking the tam-tam while it is in the water and then taking it out. However, it is not possible to achieve the opposite dynamic effect and increase the volume in this manner.

The rim of the tam-tam is bowed by a cello bow, or preferably a double-bass bow. The instrument must be held firmly to stop it moving up and down with the bow. This technique can only be performed relatively quietly (p).

If the tam-tam is damped with a cloth the resulting sound is dry and dull and lacks a large number of partials.

Because the tam-tam produces a large number of inharmonic partials the sound has noise-like character. It is for this reason that no definite pitch can be determined.

The tam-tam has no difficulty rising above the sound of an entire orchestra. The sound varies according to the type of mallet, the point at which the instrument is struck, the material and, of course, the size of the instrument.

A cast bronze tam-tam has a higher fundamental than a sheet bronze one. Because it is lighter, the latter instrument is much easier to damp. However, the stately timbre of its cast bronze counterpart is lacking at all dynamic levels.

Piano tones have a darker timbre.

The wide range of tonal possibilities means that the tam-tam is used in both loud and soft passages. It often serves to complement an existing orchestra sound but can also create a particular mood (for example slow, soft strokes to represent the human heartbeat).

A comparison between the tam-tam and the gong

The biggest difference between the tam-tam and the gong is that the tam-tam possesses no audible definite pitch. Another important difference is the sound characteristics: whereas the tam-tam's voice can range from majestic and mighty to threatening and booming, the gong sounds majestic, brilliant or exotic. In other words, the gong's sound can only be described as “solemn” and “dignified”.

The decay of a gong note struck with the same force on an instrument of the same size is shorter than that of the tam-tam; a tam-tam note can resonate for several minutes.

The tam-tam and the gong do have things in common, however: on both the pitch is lower if the instrument is bigger. The weight also has an effect; the heavier the instrument, the lower the pitch.

The tam-tam has a far greater range of tonal possibilities, not only because of the many different mallets that can be used. On the other hand melodies can only be played on gongs.

The tam-tam is used to add a particular timbre to the overall sound of the orchestra or to provide accents. The instrument's sound is very conspicuous and should therefore be used with care.

A good blend of percussion instruments is achieved especially by those with a deep and dark sound such as the bass drum, gong, timpani etc.

However, the tam-tam can also add bass to the high, metallic timbre of instruments such as the cymbals, triangle, tambourine, bell-tree, bells, etc.).

Trumpets and trombones combine especially well with the tam-tam and the timbre becomes more penetrating and more metallic, although it can also sound more threatening.

Piano tones can also achieve a good blend with mellow-sounding brass such as the horns.