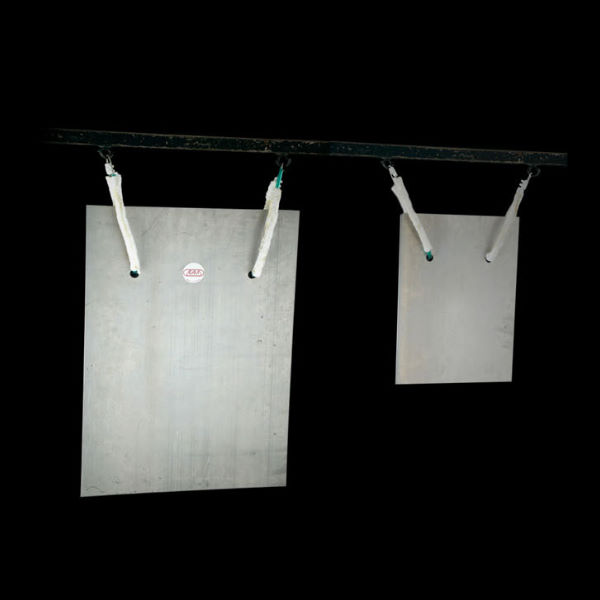 Bell plates have been used in the opera and symphony orchestra since the end of the 19th century to imitate church bells and for playing very low-pitched bell parts. Whereas tubular bells (chimes) cover the higher register, bell plates have proven more suitable for the lower compass, from about C4 downward. In the past, solid steel bars and other metal objects were also used as bell substitutes.

Bells in the orchestra

In the 18th century it was extremely rare to use bells in the orchestra. It is assumed that J. S. Bach was the first to use them. It was particularly in dramatic contexts in opera that the sound of bells was frequently required, but the use of church bells was impractical owing to their size and weight. To solve this problem, substitute instruments were made. A bell with the pitch C2 weighs 20 tons. In some large theater buildings a set of church bells was installed, for example the Bolshoi Theater in Moscow, the Grand Opera in Paris and the Dresden Opera.

In the 19th century many attempts were made to make the sound of church bells available to opera and symphony orchestras by means of more manageable instruments. Success was achieved with various metal objects, experiments being carried out with hanging plates, bars, discs and vessels. Long piano strings thickly wrapped and amplified with resonators were also tried out. Many of these experiments took place in Bayreuth (for Richard Wagner's Parsifal) and the Royal Opera House, Covent Garden.

These efforts had as their aim the combination of two aspects: on the one hand the most accurate imitation possible of the bell sound with its high proportion of overtones; and on the other, a sound with a definite pitch.

The Chinese were already using bells in the orchestra some 4,000 years ago. Musical plates made of metal originated in Asia, too, where they have been used from time immemorial and are still hugely important today. In Europe they were first used at the end of the 19th century, initially in the theater. Later on they were adopted by opera and symphony orchestras as a substitute for large bells.

In the 20th century whole sets of tuned plates have been arranged either chromatically or according to the composer's specifications. For Pierre Boulez's musicalization of Mallarmé Pli selon pli (1962) a set of plates with a compass of two octaves (C2–C4) was made. Today, bell plates with a range of three octaves (C2–C5) are available. Those with the best sound are made of bronze; at the same time, though, these are also the heaviest and the most expensive.

Each plate has two holes in its upper edge. Through these holes wires are passed from which the plate is suspended. The holes are drilled at the plate's nodal points, i.e. in places where it does not vibrate. In this way any impairment of the sound is avoided (if holes were drilled in places that vibrate the sound quality would be poorer).

The dimensions of the rectangular plates are approximately as follows: the smallest is about 30 cm long x 25 cm wide, the largest 100 cm x 75 cm. An aluminum plate of this size (pitch: C2) weighs about 6 kg, a plate with the pitch C5 (approx. 30 x 25 cm) weighs about 1 kg. If the largest plates are made of bronze they weigh about 30 kg, the pitch is C2. The volume such plates can produce is considerable, as one may imagine.

The individual rectangular plates of aluminum alloy, bronze or steel are suspended on a frame. It has become common practice to hang only those plates on the frame that are necessary for the piece to be performed.

However, a set of chromatically tuned plates can be arranged to correspond to a keyboard; 13 plates make an octave and can be hung on a semicircular frame in the same order as the keys of a piano (the lower row represents the white keys, the upper row the black ones). In other words the musician has what amounts to a gigantic mallet instrument. To save having to reach over great distances, the player may decide not to arrange the plates chromatically but in the order most convenient for the piece to be performed.

The possibilities range from a single plate held in the percussionist's hand to sets of bell plates with a compass of between 1½ and 3 octaves.

The plates are both vibration generator and resonator. To amplify the lowest partials of particular plates, which can produce only a limited volume, box-shaped resonant chambers can be placed behind the plate. In the past this was common practice, but nowadays electronic amplification with microphones and loudspeakers is most common. This has the advantage not only of amplifying the lowest partials but also of making even the most delicate tone settings and the most subtle playing techniques audible.

The bell plates are struck with heavy, hammer-shaped mallets made of wood or mallets with a metal core. Depending on its hardness, the mallet head is covered with either leather or felt. The length of the handle is about 30–35 cm, that of the head about 20–27 cm.

To bring the lowest-pitched plates to full vibration, particularly heavy, disc-shaped mallets with a felt wrap are necessary.

For other effects, wooden sticks (drumsticks), triangle beaters, double-bass bows and various other beaters are used – there is no limit to the possibilities.

Sounds as written. Notation is in treble or bass clef.

When playing a set of bell plates the percussionist is faced with the following difficulties: the great distance between the plates, their differing size, damping and keeping an eye both on the score and the conductor. Long sequences can only be played at a slow tempo or require a great deal of practice, especially with regard to the exact damping of notes.

The sound is influenced by the weight and hardness of the mallet: soft mallets bring the fundamental more to the fore while hard ones favor the higher partials.

The striking spot in the center of the plate produces a clear fundamental, while striking the plate in the top or bottom third (still in the middle) produces a sound so rich in harmonics that the fundamental can be masked.

The musician damps the resonance with the hand.
It should be noted that the whole body is required to damp the resonance of the largest plates, hopefully not with the result that both plate and percussionist swing back and forth through the concert hall (-:

Single notes are the most suitable playing technique on bell plates. Their timbre depends on a large number of factors: the choice of mallet (from soft to hard, light to heavy), the striking spot (more fundamental in the center, more higher partials in the top or bottom third), the force of attack. The sound develops only slowly on the largest plates, which means that rapid sequences of notes are not possible; they can only be performed in the higher register. In addition, it should also be borne in mind that damping the vibrating plate with the hand requires a certain amount of time.

Bell plates are used principally to perform two tasks: as a substitute for church bells and to add color. The practice of combining bell plates with metallophones of all kinds was inspired by the music of eastern Asia and was adopted by orchestra music in the 20th century.

The extent to which the bell plates blend with other orchestra instruments depends on the sound structure. Their properties mean that a particularly good blend is achieved with metal idiophones with definite pitch: glockenspiel, vibraphone, gong. In addition, they combine well with all instruments that have a sound composed of attack and resonance: Gong, cymbals, tam-tam, timpani, harp, piano.

Bell plates in the orchestra