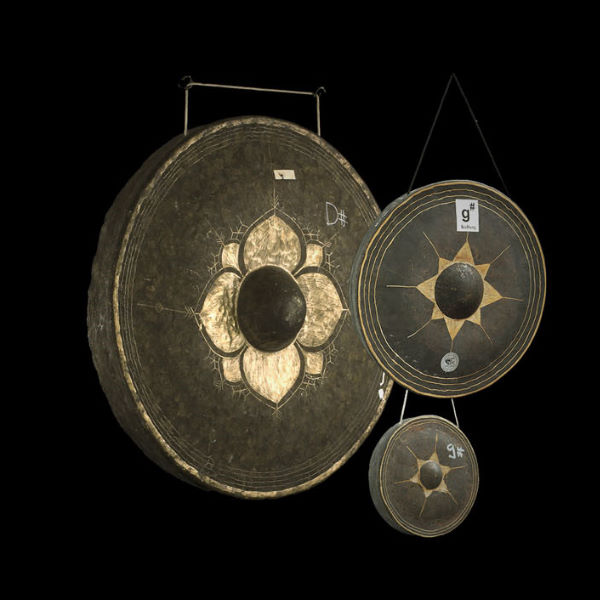 Besides the mallet-played instruments, the gong is the metal percussion instrument that provides melodies and an exotic flavor in that section. Unlike the tam-tam the gong has a definite pitch and a knob in the center (for which reason it is also known as the button gong). The center of the tam-tam is flat.

The gong did not become part of the symphony orchestra until the 19th century, although it had been known in various parts of Europe since the 16th century. The gong’s sound develops best in the lower register and it is for this reason that it is often used to complement the bass. However, it is also possible to play complete melodies on gongs, which can require the setting up of a large number of stands. Because of the size of the instrument playing the gongs sometimes demands a fair amount of acrobatic skill. (-;

The gong is struck with special mallets and has a particularly full-sounding and round tone in the bass. In the higher register it loses dynamic power very quickly, the tone dies away rapidly and sounds very thin.

The term gong, which has been in use in the West since about 1590, comes from the Javanese name for a struck idiophone with the form of a vessel: gong ageng (large gong). The –ng ending indicates that the instrument was a knobbed gong.

Gongs appeared in China in about the 7th century BC. Although it is still not possible to say for certain in which country gongs originated, places of gong manufacture are found more or less all over Asia. The great importance of these instruments in Asia is shown not only by the wide variety of different forms but also by the fact that groups of gongs and gongs in combination with other instruments (metallophones) play a dominant role in orchestras (e.g. in gamelan orchestras in Java).

In the past gongs were used in religious rites and were richly decorated with images of animals, people or characters. Excessive painting may well have impaired the quality of the sound and nowadays only the pitch is generally painted on the instrument.

The gong arrived in Europe towards the end of the 17th century and was first used more for the purposes of exhibition than for making music.

In the 19th century the tam-tam and the gong became ever more distinct from each other: the tam-tam has an indefinite pitch, the gong a definite one. Because of this separation composers began writing the pitch and performance instructions into the score.

The first composition to feature the gong was probably Gossec's “Funeral Music for Mirabeau” (1791). Camille Saint-Saëns used a gong in his opera La princesse jaune (1872). In his opera Madame Butterfly (1904) Giacomo Puccini asks for a twelve-strong gong group. Carl Orff especially, in his operas Antigonae, Oedipus der Tyrann and Prometheus, requires a large number of deep gongs, while John Cage and Lou Harrison use a great many high instruments.

The gong is a round disc with a wide rim turned up at right angles. So that it can be suspended the instrument has two holes in the rim through which twine or wire is passed. For reasons of acoustics, these holes must be drilled in places that do not vibrate.

The highest quality bronze gongs are made in Java.

The gong is suspended on a metal or aluminum stand which is usually on wheels.

Of the different types of gong (a button gong, a gong with the edge turned over, or a flat gong) it is the button gong that has established itself as an orchestral instrument.

The gong is usually struck with special mallets, which have the following characteristics:

The score should always make clear which pitches the composer requires. The decay time should also be indicated.

The range of the gongs varies enormously and depends on the instrumentation of the orchestra in which they feature. Today the following approximate compass may be assumed: C2–G5.

Sound is produced either by striking the gong or rubbing it. A wide variety of different mallets is used. The gong is struck right in the center, in other words, on the knob, since it is here that the greatest volume and purest tone are produced. The larger the gong, the heavier it is. To achieve the fullest-sounding tone greater force is required, which means that the mallets must also be larger and therefore heavier. Care should be taken always to the right mallet for each gong.

The pitch of the gong is always easily recognizable, whether the note is piano or fortissimo.

Depending on which kind of mallet is used (and on the dynamics) the gong sounds dark, metallic or majestic.

The gong’s dynamic range is smaller than that of many other percussion instruments (snare drum, tam-tam, etc.). The main reason for this is that at fortissimo levels the dynamics are limited; once a particular volume is reached the gong “overshoots” and loses volume. A large number of strong partials develop which detract from the sound.

The gong is struck with various types of mallets. The type of mallet and attack influences the timbre.

The gong is damped by the percussionist’s hand closing around the knob immediately after it has been struck. For the damping of large gongs, the percussionist may need to use his or her entire body.

Rolls are played either on the knob or button (provided it is big enough) or, on smaller gongs, beside the knob with two mallets.

The merging of individual tones is easiest to achieve with soft mallets, although harder mallets and even wood mallets are also used when a particular tone is desired. The frequency of strokes depends on the size of the gong and the type of mallet used.

Repetitions with and without accents are possible up to the speed of a roll, although the build-up of sound quickly drowns the sound of the individual beats.

The rim of the gong is bowed by a cello bow, or preferably a double-bass bow. The instrument must be held firmly to stop it from moving in sympathy with the bow (either with one finger on or next to the knob, depending on where the sound develops best, or possibly on the rim by the suspension holes). This technique can only be performed relatively quietly (p).

If the gong is damped with a cloth a dry, dull sound results which lacks a large number of overtones. The pitch is still recognizable, however.

The gong has an exotic timbre and is used especially as an ‘effects’ instrument. It lends the orchestra an exotic flavor in Giacomo Puccini’s "Turandot" and Richard Strauss’ "Die Frau ohne Schatten".

The gong has a precise pitch, a dark timbre and a very full, round sound.

The pitch can be easily determined at every dynamic level. If the attack is too hard, however, the sound can “overshoot” and become unpleasant, the pitch not becoming apparent until later. Resonance in this case can be shorter than that of a mezzoforte attack.

Because the sounding note has a precise pitch it can be used to color a melody or the overall sound of the orchestra. It should always be used sparingly, however, because it is highly conspicuous.

A good blend of percussion instruments is achieved especially by those with a deep and dark sound such as the bass drum, tam-tam etc.

However, the gong can also add bass to groups of high mallet-played instruments such as the marimba, the vibraphone, etc.).

When a gong is played at a low dynamic level (p), a degree of blending is possible with low woodwinds such as the bassoon and with the low strings, such as the cello and the double-bass.