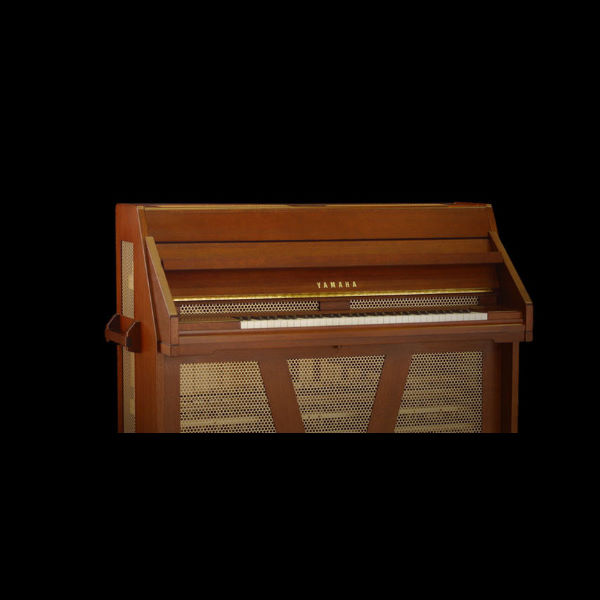 The celesta was invented at the end of the 19th century after several experiments and immediately found inclusion in the orchestra. It possesses an interesting dual character: the way its sound is produced makes it a percussion instrument (idiophone), but it is played as a keyboard instrument, usually by a pianist. Celesta parts are lively and quick and often require great virtuosity.

The name is derived from the French céleste, meaning “heavenly”. As with the names of many other instruments this appellation also alludes to the timbre and symbolism.

The dream of a “heavenly” sound: early experiments

In 1788 the Irishman Charles Glaggett invented an instrument called an aiuton, the sound of which was said to be sweeter and warmer even than that of a glass harmonica or a stringed instrument. To achieve this sound Glaggett mounted a row of tuning forks or metal prongs on a hollow box which were struck by small hammers operated by the keys of a keyboard. The instruments had a range of three to six octaves and never evolved beyond the experimental stage.

80 years later, in about 1860, Victor Mustel, the father of the man who was later to invent the celesta, came up with the typophone or dulcitone. This was another instrument with a keyboard and a row of tuning forks as the sound generator. While its timbre was said to be very similar to the celesta's, it could not produce anything like the same volume and for this reason failed to gain acceptance. It was only rarely used.

The breakthrough: a “heavenly” sound is achieved

The old 18th century idea of attaining a timbre that was at once as soft and warm as possible but could nevertheless reach a satisfactory volume ultimately led to the invention of the celesta 100 years later. The idea of combining a metallophone with a keyboard was already known from the keyed glockenspiel.

In 1886, in Paris, the harmonium maker Auguste Mustel developed an instrument called the “celesta”, which met all the requirements and rapidly found acceptance in the orchestra. Mustel's celesta was already constructed on the same pattern as the modern celesta with a keyboard, metal bars, resonators and a pedal, and it also possessed the required “sweet” sound. It had a range of five octaves, from C3 to C8 (concert). However, the sound of the lowest octave was unsatisfactory and the second generation of celestas only had four octaves, starting from a concert C4.

The first celesta part for orchestra was probably written by Ernest Chausson in 1888.

Pyotr Ilyich Tchaikovsky first heard the celesta in Paris and immortalized the instrument in The Dance of the Sugar Plum Fairy in his ballet The Nutcracker (1892).

In his opera Der Rosenkavalier (1911) Richard Strauss accompanies the presentation of the silver rose in Act 2 with the celesta's heavenly tones.

The celesta has symbolized the romantic, the mythical, the mysterious, the lustrous and the dream-like in ballets and operas ever since. Dream sequences are conjured on stage by the sound of the celesta, as are other seemingly unreal levels of reality that are as fragile as the celesta's music itself. A favorite is nocturnal scenes in which the moonlight glints on the water like silver.

Today, complex glockenspiel parts that were originally written - also in chords - for the keyed glockenspiel (e.g. in W. A. Mozart's Magic Flute and Olivier Messiaen's Oiseaux éxotiques) are played by the celesta.

The celesta looks like a harmonium, that is, it consists of a case with a keyboard and pedal. The case contains the metal bars, the resonators and the complicated striking mechanism.

Sound is produced primarily by steel bars which rest on felt rails over hollow wood resonators. The steel bars are struck by felt-covered hammers which are connected to a keyboard by means of a complicated mechanism. Notes are played on the keyboard, as on the piano. However, unlike the piano, the celesta's hammers vary in size and weight; the lower notes are produced using larger hammers with a thicker felt covering, which results in a particularly warm and rich timbre. This mellowness in the lower register is one of the celesta's most cherished qualities.

The resonators, hollow boxes made of wood, are fixed below the metal bars (one resonator per bar) and fashioned to correspond exactly to the pitch of the bar above. The resonators serve to amplify the fundamental and resonance of their particular bar. This is especially important because steel bars produce a high proportion of inharmonic partials. The resonator amplifies the fundamental and suppresses the inharmonic partials which ensures a clearly identifiable pitch.

The resonators, especially the larger ones for the lower notes, require a lot of room and for this reason are arranged in two rows, one above the other, with the corresponding metal bars. To preserve a consistent timbre the pitches over the entire range are spread over both rows, for example one pitch on the top row, the next one up on the bottom etc., rather than the lower register being below and the upper above.

The pedal works in the same way as on the piano. It raises the dampers and allows the notes to resonate.

Differences between the glockenspiel and the celesta

The biggest difference between the keyed glockenspiel and the celesta is that the latter has a greater compass in the lower register (on older models C4-C8, on more recent ones C3-C8) and the lower notes possess a fuller sound.

The lower notes present some problems in terms of acoustics, because the larger the metal bar, the greater the proportion of inharmonic partials. An extension of the compass in the lower register is only made possible by the addition of the appropriate soundboxes which amplify the fundamental of each bar while at the same time suppressing the inharmonic partials. This also results in greater volume, which means that soft felt hammers are quite sufficient for the striking mechanism, thus ensuring a warmer, richer timbre with fewer overtones than the glockenspiel with its hard mallets.

The celesta is a transposing instrument. As for the piano, notation for the celesta is in treble and bass clef. The sound is an octave higher than written.

Instruments of different sizes exist with ranges of three to five and a half octaves.

New celesta with five and a half octaves: C3 - F8

By pressing a key a hammer strikes the metal bar. Depressing the pedal raises the dampers, allowing the note to resonate. The instrument is therefore played the same way as the piano, using finger and pedal techniques. The technical demands mean that it is usually played by a pianist, although easier parts can also be played by a percussionist.

The playing techniques on the celesta are the same as those on the piano and range from single notes to typical figures: rapid scales, glissandos, arpeggios, tremolos, octave tremolos, chords. All these figures are very effective when played legato.

The pedal is used to prolong notes.

The technique is the same as on the piano. Dynamic levels from piano to forte are possible, as are gradations of articulation from legato to staccato. Slow and very fast tempos are also possible.

The repetition of a note or chord is performed as on the piano.

Trills are one of the embellishments that can be performed easily.

A precisely controlled trembling, produced by rapid reiteration of notes with the finger or the hand. The notes merge into a continuous tone.

Tremolos can be performed with two notes or a chord. Chord tremolos are usually played with both hands alternately, while especially difficult tremolos require two players using all four hands on the same keyboard.

As on all keyboard instruments the octave tremolo with one hand is one of the most common tremolos. Notes an octave apart are played in rapid succession so that they appear to merge to a single tone. The effect is exciting, brilliant and ecstatic.

As on all keyboard instruments the notes of a chord can be played singly in rapid succession, producing a gentle effect.

Chords the notes of which are spread so far across the keyboard that they can only be played one after the other - similar to arpeggioed chords.

Doubling in octaves with one hand or both hands reinforces the sound and is one of the most common techniques on all keyboard instruments.

The playing of fast and slow scales either with one hand or with both hands simultaneously is another very popular part of every keyboard instrument's repertoire. It is particularly effective on the celesta.

The celesta's timbre consists of the attack and very long resonance.

A comparison between the sound of the celesta and the glockenspiel

A comparison with the sound of the piano

Its sound characteristics mean that the celesta's main tasks are the addition of color rather than melodic, harmonic or rhythmic parts. In combination with other instruments it brightens the overall sound. It combines most effectively with the harp, the high strings and the woodwinds, especially the flute. The warm sound of the celesta is less apparent in sound combinations than that of the glockenspiel.

The celesta's tasks in combinations with other instruments can be divided into three main categories:

The celesta best fulfills the tasks described above in transparent, chamber music like scoring.

The celesta can also replace the glockenspiel to play challenging parts originally written for the keyed glockenspiel, which fell into disuse owing to its unsatisfactory sound.