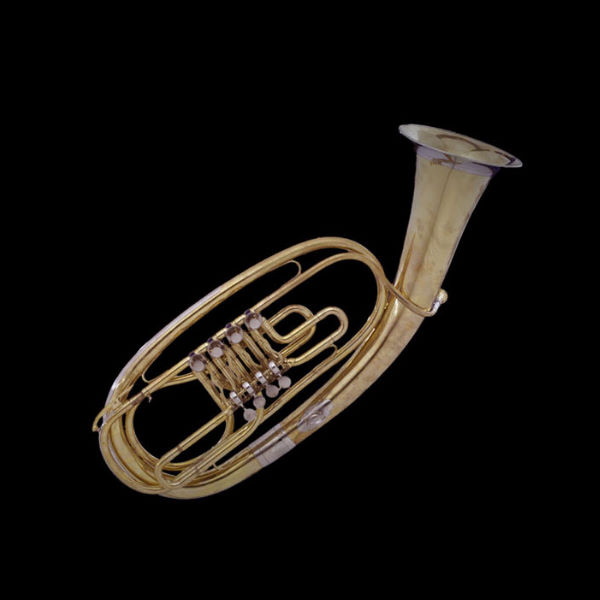 The Wagner tuba, conceived by Richard Wagner for his Ring of the Nibelung, is made in two sizes, Bb (tenor instrument) and F (bass instrument). In the symphony orchestra two of each instrument have always been used. Because they have a horn mouthpiece they are played by hornists.

Playing technique and position underscore the fact that the instrument is molded entirely on the French horn; the four valves are operated with the left hand, and not, as on all other tubas, with the right. Unlike the horn, however, the bell faces upward.

Although the instrument's conical tubing (which is less pronounced than the bass tuba's) means that it belongs to the bugle-horn family, its playing technique and sound characteristics place it among the horns.

Wagner tubas bear the name of the composer Richard Wagner, because it was at his instigation that they were made and in one of his works that they were first played. In 1851/52 Wagner was already composing his opera Rhinegold, the first part of his tetralogy The Ring of the Nibelung (UA 1869-1876), when he started looking for a new sound for which no instrument yet existed. His idea was to create a tone in keeping with the horns (middle register) and the low brass in the bass register, the bass and contrabass tubas. That an instrument of this kind would also bridge the gap in tone between the trombones was a welcome side effect.

At the same time Wagner intended a heroic, solemn and stately instrument as a contrast to the lyrical horn. In the end, he was able to realize his idea with the help of existing instruments.

In 1844 Vaclav František Czerveny (1819-1896) from Hradec Králové (Königgratz) brought a tuba-like instrument with a horn mouthpiece onto the market. This was the cornon, and it became very popular in Austrian, German and Swiss military bands in which it often replaced the horn. There is much evidence to suggest that this instrument was known to Wagner.

In October 1853 Wagner was staying in Paris, where he met the well-known instrument maker Adolphe Sax (1814-1894). In 1845 Sax had patented a type of bugle-horn he himself had conceived, the saxhorn. In 1846 he was awarded a patent for the saxophone. The saxhorns were a family of bugle-horns made in nine different tunings from soprano to contrabass, covering the entire spectrum. The idea behind the creation of this family was uniformity of timbre. The saxhorns possessed great precision, purity and ease of intonation and the narrow bore profile also gave them a thin timbre. All French wind instruments tend to have a narrower bore than their German counterparts. However, the saxhorns' greatest advantage was the fact that they all shared the same fingering and timbre, making them an entirely homogeneous group. It was this that made them so successful.

A bit of everything

Although the principle of the horn mouthpiece was adopted from the cornon, its wide bore was not. On the other hand, the narrow bore of the saxhorns was adopted but not the deep, cup-shaped mouthpiece. The result was a new ”tuba”, which later became known as the Wagner tuba and was able to achieve the desired combination of the horn, tuba and trombone timbre. It was also said at the time that the new instrument ”refined” the tuba sound. What distinguished the Wagner tuba from the horn was its wider and more conical bore, while this bore was considerably narrower than the bass tuba's.

In Don Quixote only one Wagner tuba is used (as a tenor tuba in Bb), playing an octave above the bass tuba or in combination with the horns and bassoons. Gustav Holst and Maurice Ravel use them singly, too.

Wagner tubas are made either by the Alexander brothers in Mainz or the firm of Mahillon in Brussels. Nowadays double instruments are used: the tenor Wagner tuba in (high) Bb/F and the bass Wagner tuba in F/(low) Bb. In film music Wagner tubas have often been used when a particularly heroic horn sound is required. This is still the case today. Overall the Wagner tubas' timbre lies somewhere between the horn, the bass tuba and the trombone. Composers may assume that Wagner tubas (and hornists who can play them) are available in modern opera and symphony orchestras.

Wagner tubas combine elements of the bugle-horns (tubas) and horns. These very mellow and rich-sounding instruments have a horn (funnel-shaped) mouthpiece, the upper tubing of a horn, a narrow bore similar to the horn's (narrow and conical, i.e. narrower than the tuba's) and the lower tubing of the baritone. The tube is narrow and slightly conical along its entire length, cylindrical near the valves and ends in a bell with medium flare. The rate of taper at the end of the tube is much slower than on the horn with its widely flaring bell. Its oval form reflects the shape of the instrument that was usual when it originally appeared, in German military bands by 1869 at the latest. The bell curves along its longitudinal axis and faces upward, as distinct from the saxhorns on which the bell faces straight up.

Notation is transposing, usually in bass and treble clef.
Sounds a major second lower than written.

The sound is a major ninth lower than written. This type of notation is used in both bass and treble clef.

Richard Wagner also uses notation in which the written notes are a major sixth higher than the sound (Wagner tuba in Eb).

Notation is transposing, usually in bass and treble clef.
Sounds a fifth lower than written.

The sound is a twelfth (octave + a fifth) lower than written. This type of notation is used in treble clef.

Richard Wagner also uses notation in which the written notes are a ninth higher than the sound.

Playing technique and position underscore the fact that the Wagner tuba is molded entirely on the French horn. Wagner tubas are played by hornists because both instruments use a horn mouthpiece. The four valves are operated with the left hand, and not, as on all other tubas, with the right. Unlike the horn, however, the bell faces upward, while the instrument rests on the musician's lap.

Generally notes from the 1st to the 12th natural are used (notes up to the 16th natural are possible but very difficult to play and are not asked for). On both instruments (Bb and F) pedal tones (1st naturals) are used up to Eb1 only.

The entire chromatic scale can be played throughout the whole compass. This means that Wagner tubas are whole-tube instruments (instruments with four valves that make it possible to lower the pitch of the 2nd natural eleven times so that the gap to the first natural of the fundamental pitch can be bridged).

As on all bugle-horns, attack and speech is very easy and soft.

All notes down to Bb1 can be played at every dynamic level (also ff). Lower notes are played by the Wagner tuba in F, on which they can be played ff, even though they can still be played on the Bb instrument.

The Wagner tuba makes great demands on the musician because intonation is more problematical and the embouchure less stable than on the horn. The notes respond consistently and smoothly, and the horn mouthpiece makes them similar to the notes of the horn, so that good tonal balance is achieved between the two instruments. The wider bore profile means that the embouchure is less sharply defined and precise than on the horn, but the notes can be blown more freely. Wagner tubas are best suited for the evocation of solemn, stately and heroic moods and their timbre bridges the gap between the horns and the low brass as well as between the bass tuba and the trombones.

Easy to perform, even at speed, at all pitches. Very fast scales are possible. Single tonguing is used up to about the tempo from which slow double tonguing is possible. The instances of where one or the other technique can be used overlap.

A microtonal pitch fluctuation possible in passages at any tempo and at all dynamic levels; vibrato can be played in virtually any context, from pp to ff and from slow to fast.

Generally easy to perform, difficult only in the lowest and highest registers.

Can be performed in the middle and high registers but is only very rarely asked for.

Trills are performed using the valves, are easily playable and produce a good effect. Despite this they occur only rarely in orchestra literature.

Glissandos are playable and are asked for by composers. Technically a combination of a lip and a valve glissando.

Mutes are used to reduce the volume of sound. They also have the effect of brightening the timbre.

Slurring requires a large amount of air. Consequently, the length of slurred phrases must be chosen with care. Large leaps can be performed very well in legato. A staccato-like articulation following an accentuation is also easy to perform and is in keeping with the technique of playing a bass instrument.

Overall the Wagner tuba's timbre lies somewhere between the horn, the bass tuba and the trombone. The registers are relatively homogenous and overlap.

Comparison with the horn: More somber and less penetrating, less incisive attack, softer. The horn (especially the Viennese horn) begins to blare once a certain volume has been reached. This does not occur on the Wagner tuba. Easy response.

The Wagner tuba in Bb generally sounds thinner than the F instrument.

The lowest notes cannot be played forte and are too weak to function as a bass voice. The higher notes can assert themselves.

Brightens the timbre; not as bright as the horn, but richer.

The Wagner tuba in F generally sounds richer and louder than the Bb instrument.

The lowest notes cannot be played forte and are too weak to function as a bass voice. The higher notes can assert themselves.

Brightens the timbre; not as bright as the horn, but richer.

Wagner tubas are best suited for the evocation of solemn, stately and heroic moods and their timbre bridges the gap between the horns and the low brass as well as between the bass tuba and the trombones. They have enough volume to play themes on their own or an octave above with the bass tuba. They perform the main tasks (harmony, melody and rhythm tasks) in the middle and low registers.

Four Wagner tubas form a self-contained group with a homogeneous sound for stately chord progressions. Played in octaves the effect opens out more.

Owing to the similarity in timbre a highly homogeneous blend is achieved in unison and in chords.

A mighty and impressive blend when played in unison. If that isn't heroic?

A very common combination both in unison and in octaves.

A particularly effective combination is achieved with the bassoons (also together with the horns), which produces a dark luster in unison and in chords.

Possess equal volume and complement each other, merging to a homogeneous group with a dark timbre in the low and middle registers.

Wagner tuba in the orchestra