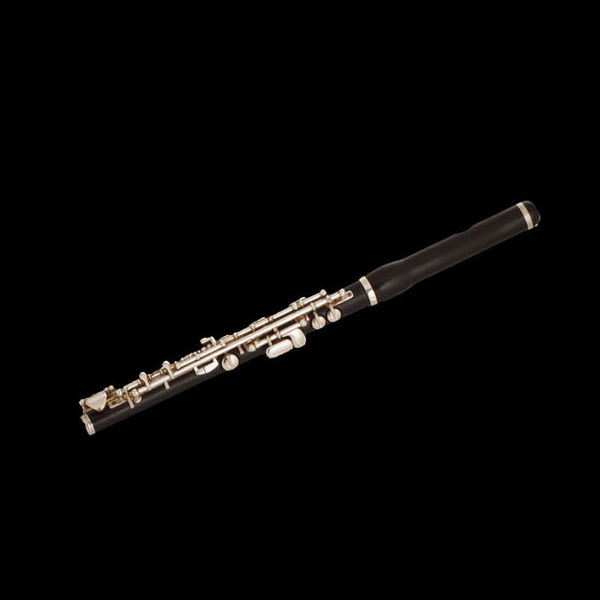 In the Middle Ages military musicians played a simple transverse flute with six finger-holes alongside the drum. These two instruments were characteristic of foot soldiers.

During the 16th century many instruments were further adapted in imitation of the human voice and came to form instrument families consisting of models in various registers. The flute family also included instruments of every register, from the treble recorder (flauto piccolo) to the bass flute (flautone).

Until the 18th century the recorder was always indicated by the term flauto. Flautino or flauto piccolo referred to a treble recorder. At this time, in order to indicate the transverse flute, the word cross, transverse or traverso (i.e., the translation of this word in the respective language) was used.

Development of the piccolo traverso

The piccolo, and the concert flute, both evolved from the military transverse flute of the Middle Ages. When in the mid 17th century the art of flute-making underwent a process of rapid innovation, the technical improvements made to the flute were passed on one by one to its smaller sister, the piccolo traverso. In the early 18th century the piccolo began to appear with one to four keys, and more were added as the century progressed. In the years that followed the piccolo's development mirrored that of the flute.

In 1832 the Munich flutist Theobald Boehm invented a revolutionary mechanism for the flute and by the middle of the 19th century it had already found its way onto the piccolo. Nevertheless, piccolos with older key mechanisms remained in use into the 20th century.

Piccolos were made in the tunings C, Db and Eb (fundamentals C5, Db5 and Eb5 - the latter tuning was favored particularly in military circles). The tubing was made first of wood, later of metal and was slightly conical.

The piccolo in the orchestra

In the first third of the 18th century parts for ”flauto piccolo” and ”flautino” began to appear in scores, although it cannot be said with any certainty today whether they were intended for the piccolo with one key or for a high recorder or flageolet. This applies to Georg Friedrich Handel's opera "Rinaldo" (1711) and "Water Music" (1715), and Antonio Vivaldi's three Concerti per flautino among others. Nowadays these parts are played by the piccolo.

Ludwig van Beethoven was one of the first composers to use the piccolo in his works to imitate sounds of nature, e.g., the whistling of a stormy wind in the fourth movement of his 6th Symphony ("Pastoral Symphony", 1808). In his "Rigoletto" (1851) Giuseppe Verdi first used a piccolo to symbolize lightning. In addition, the piccolo was used for special effects, by Wolfgang Amadeus Mozart in "The Magic Flute" (1791), for example, for a humorous portrayal of eunuchs. In many works the piercing and shrill fortissimo of the piccolo is used to heighten terror in frightening scenes.

Composers of the Romantic period, particularly Richard Strauss and Gustav Mahler, integrated the piccolo completely into the orchestra's woodwind section. Since then it has been used extensively to add color and shading to the sound of the orchestra and occasionally even as a solo instrument.

The piccolo is about half the size of the concert flute.

Whereas the flute consists of three parts, the piccolo's tubing has only two, the headjoint and the body (or middle joint). It does not generally have a footjoint. The headjoint is cylindrical, the body conical, although it can also be the other way round. In addition to piccolos with tubing either entirely of wood or entirely of metal combinations such as a silver head with a wood body and plastic tubing are also used.

The embouchure in the headjoint is only very slightly smaller than the flute's, although narrower.

Like the flute the modern piccolo is equipped with the Boehm mechanism. Its tone holes, which are about 6 mm in diameter, are closer together and the keys are smaller. Moreover, the additional keywork for the footjoint is missing. It is for these reasons that many flutists find the piccolo easier to finger.

This means that the piccolo's range is an octave above that of the flute. The addition of a footjoint to extend the compass downward is not usual on the piccolo.

Theoretically, adding a C foot to the piccolo in C can extend the range down to C5 (by adding a B foot it can theoretically be extended even as far down as B4). Giuseppe Verdi in his Requiem and Gustav Mahler in his 1st Symphony ask for C5 as the lowest piccolo note.

Sound is produced according to the same principles as on the flute: the flutist blows through the mouth hole (embouchure hole) and the stream of air that makes contact with the edge is cyclically directed outward and inward. This cyclically vibrating air stream is the sound generator and excites cyclic vibrations of the air column inside the flute's cylindrical tube. The flutist uses tone holes and keys to shorten the vibrating air column, thus producing an increase in pitch. The sound is projected through the open lower end and the open keys.

It is the flutist's lips that play the most important role; embouchure on the flute is highly individual. The shape of the lips, the position of the upper lip in relation to the lower lip, angle of the embouchure etc. are all decisive factors in intonation. There are so many flutists, so many different embouchures and consequently so many different means of expression.

Blowing strongly results in a higher pitch than blowing softly; this is true of all flutes. The flutist compensates for these differences by means of the embouchure.

Playing the piccolo at the piano dynamic presents the musician with a number of difficulties which are peculiar to the instrument. Highly accomplished players can therefore be recognized by their ability to play quietly:

The piccolo is extremely agile, and the same playing techniques are possible as on the flute.

Alternating articulation between ta and da is also used.

The articulation of the syllables ta-ra, (te-re or similar) produces an effect which seems to simulate the bowing of a violin and is used for greater clarity of accentuated notes.

Can be performed in two ways:

The piccolo is especially well suited for the performance of trills. Minor and major trills are possible up to A7.

Tremolos can be performed with ease on the piccolo except in the very highest and very lowest registers.

Modern composers often require the piccolo to perform the same playing techniques as the flute. Because of the instrument's small dimensions (resonance chamber, keys, embouchure) the effect of these is reduced, however.

The key slap (key click) sounds much quieter than on the flute.

In the same way percussive tongue effects like the tongue ram (tongue stop) or tongue click over the embouchure is reduced.

The piccolo has two contrasting characters: played piano it sounds delicate and sweet, but played forte it becomes forceful and shrill.

The sound has less volume and is not as brilliant as the flute's but is more concentrated and penetrating.

Like the flute, the piccolo's low notes contain few overtones. They sound dull and rather hollow and are occasionally used to suggest a supernatural atmosphere. On the flute, where they are in the middle register, these notes sound much richer and more powerful.

It is the notes in the middle and upper registers that are used most often, with the exception of the very highest notes.
Depending on how and where the instrument is used delicate and graceful effects can be achieved, e.g., the imitation of birdsong or other sounds of nature. Terrifying and eerie effects are possible especially when played forte or fortissimo, as in the Scythians' Chorus in Christoph Willibald Gluck's Iphigenie auf Tauris (1779).

The piccolo's high notes are a continuation of the flute's upper register; played forte they sound piercing and are conspicuous even in tutti passages. The top notes (B7, C8) sound forced and shrill.

Since the Classical era the piccolo has been used to suggest certain themes and principally to represent sounds of nature (birds, storms, lightning). The shrill and piercing timbre has often been used to create special effects. The Romantic orchestra uses it to brighten the sound and extend it upward. The piccolo has important tasks to perform in tutti passages especially, in which it gives melody lines composed of many octave doublings a penetrating edge as the topmost octave. Solo passages are rare.

A completely homogeneous overall sound together with the flute. The piccolo reinforces the flute by playing an octave above it. It can also reinforce the flute's highest notes when the two are played in unison.

The piccolo can also effectively double the other high woodwinds (oboe, clarinet) an octave apart. The resulting blend adds intensity to the upper register in the orchestra.

A traditional pairing which provides a “military” flavor and is used for marches and processions in opera and programmatic orchestral works.

The piccolo's staccato together with a cymbal crash has the effect of a short, piercing cry or a blow with a dagger. Spontini used this effect in his “Grand Bacchanale”.

Piccolo in the Orchestra