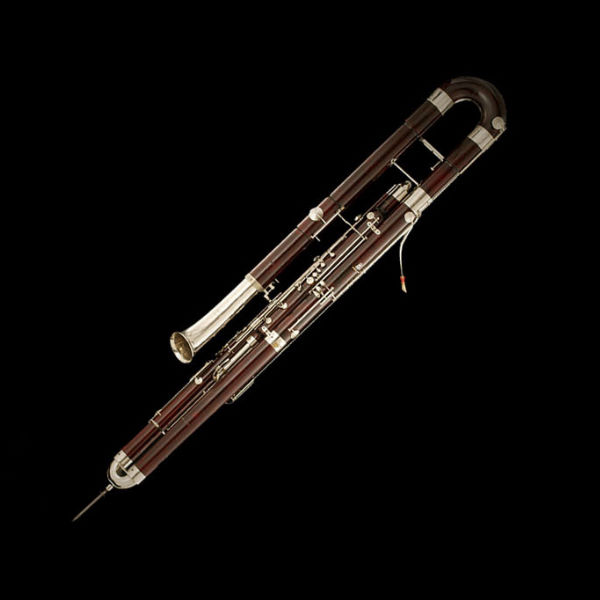 Like the oboes and the bassoon the contrabassoon is a double-reed instrument, because the mouthpiece has two reeds that lie very close together.

In the 16th century, the shawm family containing bombardes or pommers was common throughout Europe. The instruments had a straight, conical tube and a mouthpiece with a double reed. During the Renaissance period the bombarde or pommer family included instruments from the third octave above middle C (treble shawm, the direct antecedent of the oboe) to the contraoctave (great bass shawm). With the latter the shawms had reached the limits of their development and could go no lower: aside from the fact that its almost 3 meter long, straight tube was extremely unwieldy, a further downward extension of its range (to below F4) was out of the question due to the fingering problems it posed.

The dulcian: the U shape is introduced

In the middle of the 16th century the straight-tubed pommer evolved into an instrument with a U-shaped body which was made from a hollowed-out block of wood. The conical tubing of the pommer was retained. Because the instrument had a mellow and pleasant sound which distinguished it from the pommers it was given the name dulcian (“sweet-sounder”).

Like pommers, dulcians were made in several tunings. Its manageable size made the dulcian ideal for the downward extension of the range. In about 1620 Michael Praetorius named two “doppelfagotte” as the deepest dulcians, the quartfagott (range G1-A3) and the quintfagott (F1-G3). He also mentioned the planned production of an octave dulcian (“fagotcontra”) by the Berlin chamber musician Hans Schreiber which was to have a range an octave below the choristfagott (C2-G4), the precursor of the modern bassoon.

In the Augsburg Art Collection and in Dresden two octave bass dulcians from the last third of the 16th century survive. They are 1.8 m and 1.9 m high, which suggests that dulcians in the contrabass register were already being made at that time.

In the middle of the 17th century instrument makers in Amsterdam, Paris and Nuremberg began constructing the dulcian, which had hitherto been made of a single piece of wood, in four parts: wing joint, boot, long joint and bell. A third key was added to the two that the dulcian had, and the bassoon was born.

The oldest surviving contrabassoon is now in Leipzig and dates from 1714. It is about 2.7 m high and inscribed “Andreas Eichentopf in Northausen 1714”. It is modeled on the contemporary bassoon and therefore has four parts and three keys. The range went down as far as C4 (according to some sources Bb5), but was not fully chromatic.

In London Thomas Stanesby is thought to have made the first four-part contrabassoon in 1727, and in 1739 his son produced a model with four keys, which is now in the National Museum of Ireland in Dublin.

Admission into the orchestra

In the early 18th century the contrabassoon found acceptance in church music as a reinforcement of the double-bass. The higher tunings (quartfagott and quintfagott) were used for the performance of baroque scores. Georg Philipp Telemann, for example, asked for a fagotto grosso (quintfagott) in his sacred cantatas (1712-1716), Johann Sebastian Bach for a quartfagott in his Cantata no. 31 (1715).

In the fourth version (1749) of his St. John Passion Bach asks for a low contrabassoon (bassono grosso) with a range of C1-Eb3. Before this, Johann Friedrich Fasch had scored for a contre bassono in his Fantasie für Bläser (ca. 1740).

Wolfgang Amadeus Mozart exploited the dark timbre of the contrabassoon in his Masonic Funeral Music (1785) to create an air of solemnity. Its somber and dark character was also used by Joseph Haydn in his oratorios The Seven Last Words (1786), The Creation (1798) and The Seasons (1800) and by Ludwig van Beethoven in the jail scene in his opera Fidelio (1805). Since Beethoven scored for the contrabassoon in his 5th (1808) and 9th (1824) symphonies it has been regularly used in the full orchestra to support the bass voice.

A variety of forms

At the end of the 18th century the contrabassoon was integrated into many European military bands as a contrabass instrument.

It was at this time that the Prague instrument maker S. J. Truska developed a contrabassoon consisting of eight parts (bell, long joint, boot, three-part wing joint, small boot, bocal). This model became standard until the middle of the 19th century, when it was replaced by a plethora of varying forms which were developed in an attempt to meet the requirements of military music with regard to volume.

In 1839 the Viennese instrument maker Johann Stehle introduced his metal “Harmonie-Bass”, which had 15 keys and was representative of narrow-bore instruments. Narrow-bore but more compact models were made in 1856 in the Cervený workshops in Königgrätz (“Tritonicon”) and by Carl Wilhelm Moritz (“claviatur-contrafagott”). The original Moritz model had a widely flaring bell, which gave it a tuba-like appearance, and a keyboard. In Coblenz in 1847 Haseneier made a wide-bore instrument with 19 keys out of maple (“contrabassophone”), which became a model for many other instrument makers across Europe. A lightweight version of papier mâché was even produced.

In 1877 the workshop of Adam and Wilhelm Heckel produced a patented model with a chromatic range of C1-G3. What set this contrabassoon apart from previous models was its ease of response and its great agility, which enabled it to assert itself over the other contrabass instruments of the time. Richard Wagner was one who was convinced by the quality of its tone, using it in his Parsifal (1882).

At the beginning of the 20th century the contrabassoon was further improved by Wilhelm Heckel: the range was extended down to Bb5 (or, with an appropriately long bell, to A5), and up to C4. In 1901 he created the prototype of the modern contrabassoon, which boasted a full and mellow timbre coupled with great technical agility. The firm of Heckel remains one of the leading manufacturers of bassoons to this day.

In France the firm of Buffet-Crampon produced a French model in 1906 which differs mainly in terms of the keywork.

Thanks to these technical improvements, the contrabassoon, which had hitherto been confined to the reinforcement of the bass voice, was now given challenging new tasks as a solo instrument. In addition it has grown in popularity since the 20th century because of its sound characteristics and has found its way into chamber music, too.

The body of the contrabassoon is composed of six parts:

The contrabassoon is therefore composed of four parallel pieces of tubing, the metal shank, wing joint, middle joint and long joint, plus the bell. These four parts are connected by three U-shaped pieces of metal tubing. With the C bell (lowest note Bb0) the tubing is about 550 cm long, with the A bell (lowest note A0) about 610 cm. Unlike the bassoon the contrabassoon has no boot.

As on the bassoon the double-reed mouthpiece is attached to the bocal. The reeds are larger than the bassoon's: 7-7.5 cm long and 1.6-1.8 cm wide at the blowing end.

Nowadays the contrabassoon is made almost exclusively according to the Heckel system (also known as the German system) and has about 21 tone holes, all of which are closed by keys. There are no finger-holes covered by the fingers as on the bassoon.

Notation is in bass clef (only rarely in tenor clef), the sound is an octave lower than written.

In some of Wagner's and Debussy's scores the sound is as written.

The contrabassoon has a range of B0-C4.

On some models the usual C bell can be replaced by a longer, curved A bell made of metal which extends the ambitus down to A0.

Sound is produced according to the same principles as on the bassoon:

The double reed is placed between the lips and blown, which sets the two reeds vibrating against each other. They open and close very quickly, thereby sending little puffs of air into the air column inside the instrument, which is stimulated to move in sympathy.

Because the air column inside the contrabassoon's tubing is 550 cm long the sound takes longer to develop fully than on the bassoon.

As on all woodwinds it is primarily the keywork that is used to produce the various pitches. The technique of overblowing - the bassoon overblows to the octave - is largely replaced by the use of speaker keys.

Because it weighs about 6 kg the contrabassoon is played in the sitting position. It has a spike at the bottom on which it rests on the floor and is held on a strap round the neck. Both thumbs are thus free for playing.

The contrabassoon is ideally suited to solemn passages because the full sound is slow to develop. On the other hand it exhibits surprising agility in staccato sequences, and is certainly more agile in the low register than the other bass (and contrabass) instruments.

Using single tonguing sixteenth notes can be played up to about MM 140 in the middle and upper registers. In the lower register, response is slower.

Double and triple tonguing are hard to perform and are therefore not asked for. Rapid staccato sequences are performed with single tonguing.

A rolled (guttural) R against the palate is generally used, since the lingual R (produced with the tip of the tongue) is made more difficult by the reed and hampers the embouchure. The slower the articulation, the softer the sound. This technique can be performed over the entire range but is harder to play piano and in the upper register.

Trills and tremolos are not among the bassoons' typical playing techniques. Because it develops only slowly on the contrabassoon the sound is not sufficiently effective.

The image and audio examples give a comparison between legato and staccato playing.

The contrabassoon is used to suggest solemn, weighty and somber moods as well as emotive and stately ones. Staccato notes are suitable for quaint effects or, like the bassoon, can also be used to add humorous touches.

The low notes are substantial, sustaining and dark. They have a somewhat more precise sound than other contrabass instruments (e.g., the contrabass tuba). Effects reminiscent of the organ are possible. The sound is mellow at piano levels.

The dark, sonorous and mighty timbre is ideal for bass tasks.

At the top end the notes become progressively less loud and sustaining, the timbre becomes harder, brighter and rather acerbic.

In the past it was very occasionally used for thematic and solo tasks, too, between C2 and C3 and between C3 and C4.

Since the 20th century it has been entrusted with solo tasks more often (e.g., by Maurice Ravel, Alban Berg and Benjamin Britten).

Contrabassoon + tuba an octave higher produce a mighty and full sound that is capable of carrying an orchestra tutti. It can also play in unison and in octaves with the trombones, although here the sound is harder and more precise; if the sound is strongly forced the contrabassoon can only add shading.

Contrabassoon + horn: good combinations with the low horns. Together with the tuba playing an octave above it, the contrabassoon provides the bass for the horns' chordal harmonies.