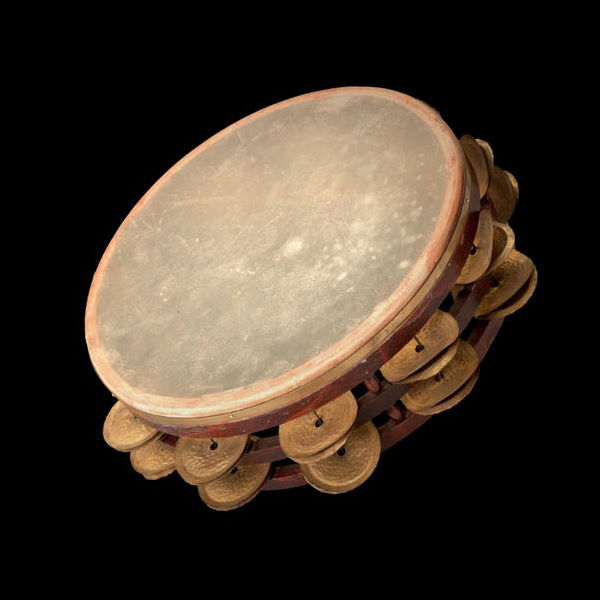 From time immemorial the tambourine has been an important folk instrument in many European cultures. Today it is especially common in Mediterranean countries where it serves as a rhythm instrument accompanying songs and dances. It is either struck with the hand or shaken.

The tambourine has had a place in the orchestra since the 19th century where it is used as a rhythm and noise instrument to add color and suggest dance scenes.

Beside this, it is also a popular children's instrument. In the 1930s Carl Orff included it in his Method. Since then it has been an essential part of the teaching of music, and for purposes of learning it is usually struck with a felt stick.

Tambourines originated in the Near East. They came into being when bells and other rattles of various kinds were attached to the shell of a frame drum. Initially though, frame drums without bells were also commonly referred to as tambourines. The instrument was already known to the ancient Egyptians and Assyrians: in Egypt it was used in religious ceremonies by female temple dancers. Women were the principal players of tambourines in other early civilizations, too. Apart from being used to accompany dances, tambourines were also played in processions, at festivities and at funerals.

Although the size of the instrument and the shape of the jingles have undergone numerous changes over the centuries the structure has always remained the same; the tambourines used by the Greeks and Romans looked very much the same as the modern instrument.

The instrument of angels and traveling entertainers

In the Middle Ages the tambourine was already common all over Europe. In medieval Britain it was known first as the tymbre, and until the 18th century as the tabret or timbrel. In France, Spain (where it is called the pendereta) and in southern Italy its importance as a folk instrument has never diminished. But the tambourine as a part of folk entertainment is not confined to Europe; it is also found in many other cultures, for instance in China, India, Peru, Greenland, the Caucasus and central Asia.

The medieval tambourine consisted of a rectangular or round flat wood frame with a single head; the underside was open. Four or more pairs of jingles were let into the shell at regular intervals. These jingles were somewhat larger and thicker than today's. In addition to or instead of the jingles small bells or other objects that produced a rattling noise were fixed to the frame. The tambourine was struck either with the flat of the hand or with the fingers in the same way as its ancient predecessor. Medieval paintings and carvings, as well as religious manuscripts, often portray the instrument being played by angels. On the other hand, the tambourine was also a favorite instrument of itinerant entertainers and minstrels.

But not only early forms of the tambourine were known as timbrels; the name was applied to other kinds of frame drum as well, for instance the frame drum with one or two heads and a model with a closed wood bottom. These drums were struck either with the hand or with wooden sticks. Some illustrations show still other drums with a single snare across the head; it may be that this string was plucked to produce a tone.

The tambourine in the orchestra

The timbrel was already being played in concert with other instruments on special occasions in the late Middle Ages. The tambourine's admittance into the orchestra was initiated in the mid 18th century by Janissary music, which enjoyed huge popularity at the courts of European princes and brought the tambourine – and the cymbals, bass drum and triangle – to the attention of a wider audience. It was around this time that the instrument began to be known as the tambourine (small drum), a derivation from the French word for drum, tambour. Among the first orchestral works to feature the tambourine were Christoph Willibald Gluck's Echo und Narziss (1779) and Wolfgang Amadeus Mozart's Deutsche Tänze (1787).

The inconsistent spellings tamb(o)urin and tambourin(e) in scores repeatedly leads to confusion, the tambourine being mistaken for the tambourin, the Provençal tubular drum. The latter is a drum played with one hand and is made of particularly light wood, is about 70 cm deep and has a single head. It is used for example in George Bizet's Arlésienne-Suite No. 2 (and therefore also in the ballet sequence in Carmen). It is still used today in folk music in the south of France.

Carl Maria von Weber used the tambourine in his incidental music for Preziosa (1821) to represent the gypsy life. Apart from this, the tambourine stands for folk entertainment, dance and, since George Bizet's Carmen (1875), epitomizes Spanish flair. It is for this specific function, and also to accentuate the rhythm and create a bright musical background, that the tambourine has been used in orchestra works since the mid 19th century.

The tambourine consists of a flat wood hoop, the so-called shell, a head stretched over it, and the jingles.

The head is either nailed onto the outside of the shell or stretched over a flesh hoop and fastened by means of a counter hoop as on the other orchestral drums. In the Middle East the head is also glued on. Set into the 5–7 cm deep shell at regular intervals are oval apertures in each of which a pair of jingles made of sheet brass is attached with a wire pin. The jingles measure about 5 cm, are cymbal-shaped and usually have slightly turned-up rims. There is often a wood handle on the shell for holding the instrument.

Orchestra tambourines have up to 20 pairs of jingles (two pairs per aperture). In smaller orchestras and ensembles tambourines with fewer jingles are used.

Unlike the cylindrical drums (snare drum, bass drum, tenor drum) the tambourine has no mechanism for bracing the head. The sound produced by striking the head is masked by the sound of the jingles so there is no need to tune the instrument. Occasionally the head is made tighter by warming it with a cigarette lighter; but this is only done if there are great changes in temperature and humidity. (When warmed the head shrinks and thus becomes tighter, but care must be taken not to burn a hole in it :-).

Since the 20th century the tambourine part has been written on a single line with no clef. This type of notation became standard because drums have no definite pitch.

Single beats are written with a short note value, often as an eighth note.

In older works the tambourine part is notated either as a C5 in treble clef or in bass clef as a C3.

Sound is produced on the tambourine either by striking the head with the hand (occasionally with sticks) or by shaking (or rubbing it with the fingers). The tambourine is therefore both a drum (when it is struck) and a rattle (when it is shaken).

To play single beats the player holds the tambourine in one hand (usually the left) and strikes the head with the other, normally with the middle finger, but on occasions with the index finger, both supported by the thumb. The striking spot is opposite the holding hand about 3–4 cm (depending on the size of the instrument) from the edge of the head. The quieter the desired tone, the nearer the rim the head should be struck. Pianissimo beats are sometimes played using the fingertips very near or even on the rim. In fast passages (up to mezzoforte) the tambourine rests on the player's knees.

If required in the score it is also struck with sticks which must have an attack that is hard and brisk enough to agitate the jingles with precision: wood drumsticks, small hard or soft felt beaters, cymbal sticks, xylophone or triangle beaters are suitable.

The sound of the head and the jingles

The pairs of jingles hang loosely from the wire pins and jangle against each other producing a high-pitched rattling sound that carries well. The pitch that results from striking the head is of no consideration since it is masked by the sound of the jingles.

Many percussionists in the orchestra hold the tambourine at an angle of between 40 and 50 degrees, because it is in this position that the best balance is achieved between the sounds of the head and the jingles, the tambourine does not sound too dry and there is no obtrusive reverberation.

There are several ways to play single beats.

Usually the player strikes the head with the middle finger supported by the thumb (only rarely is the index finger or other fingers used). The knuckles or the palm of the hand may also be used. For particularly hard beats the head is struck against an elbow or a knee. Pianissimo tones can be achieved by carefully striking the edge of the head with the fingertips.

Single beat with immediate damping of the jingles by turning the tambourine to the horizontal position (where the pairs of jingles lie one above the other and can no longer vibrate); the striking hand is held flat against the head.

To perform rapid sequences the head is struck at the edge by the fingertips of both hands alternately. For this, the tambourine rests on the player's knees and if necessary is stabilized by the forearms or the palms of the hand.

If repetitions at a high volume are required the seated percussionist moves the tambourine up and down between his knee and his hand which is held a little above it, so that the head hits the knee and the shell the hand in rapid succession.

If required in the score, repetitions can also be performed using sticks, which makes it possible to play tied trills and press rolls as well as rapid sequences.

To produce a tremolo effect in folk music the tambourine is shaken with one hand. In the orchestra the following methods are generally used:

If required in the score the tambourine can be struck with a variety of sticks such as wood drumsticks, triangle beaters or small felt beaters.

For this technique the instrument is placed on a mat or hung on a special stand (if it is fitted with the appropriate mounting).

In his Petrushka Igor Stravinsky requires that the tambourine be dropped onto the floor from just above it.

The sound of the tambourine has solely the properties of noise and is composed of the attack when the head is struck and the characteristic rattling of the jingles. Because the head is tightly braced it has no resonance.

The brightness of the jingles means that the tambourine can still be heard in the midst of other orchestra instruments. A shaken fortissimo roll is still plainly audible even in tutti passages.

In the orchestra the tambourine performs rhythmic and tonal tasks which generally serve the creation of moods suggestive of folklore, gaiety, dancing, ecstasy etc. It plays solo dance rhythms and accentuates and adds noisy brightness to the overall sound of the orchestra.

As a rule the tambourine combines well with the other drums (snare drum, tenor drum and bass drum) and with metallic-sounding percussion instruments. The snare drum and triangle together with the tambourine produce a diverse composite noise that adds substance to tutti passages.

The combination with the mallet-played instruments (xylophone, marimba) produces a familiar sound image. With wood percussion instruments such as the castanets, wood blocks, temple blocks, slit drum and all the others that require a short, sharp attack, a broad spectrum of subtle sound and noise effects is possible.

The tambourine can join the woodwinds and lend them a bright, noisy element resulting in a composite sound reminiscent of dance music. Trills, tremolos and rapid rhythmic sequences are reinforced by the tambourine's roll.

Col legno playing on the strings is further accentuated by the tambourine.

Excellent effects can also be achieved with the piano.