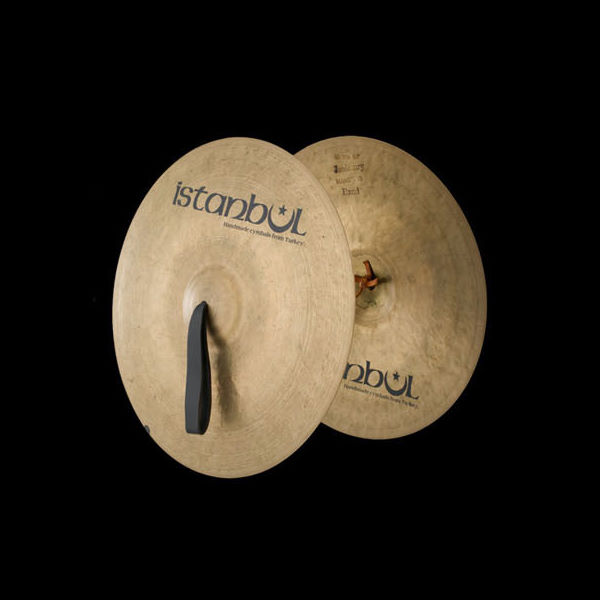 Nowadays the cymbal family consists of the pair (cymbals a due), the suspended cymbal and the hi-hat. The pair of cymbals and the hi-hat are sounded by striking one plate against the other, while the suspended cymbal is struck with a stick or mallet. In every culture the striking of one cymbal against another (hence the term "concussion vessels" to describe cymbals) is the oldest technique. Striking the plate with a stick (as a percussion vessel) was introduced as a concession to Western musical styles.

The pair of cymbals is used especially to accentuate musical climaxes and from the Romantic period it has played an important role in the orchestra. Its powerful sound can rise above the entire orchestra.

In marching and wind bands the cymbals have always been one of the most important instruments. Indeed, their rhythmic function and distinctive sound are such an integral part of this type of music that it would be unthinkable without them.

The term cymbal (also zymbel or zimbel), which originally described every cymbal-like instrument, is derived from the Latin cymbalum and the Greek kýmbalon (cup).

In the orchestra the pair of cymbals is used chiefly to stress important musical accents, but it can also be used as a quiet rhythm instrument in the background, together with the bass drum, for example.

The hi-hat is found only rarely in modern orchestra literature. However, it has been an integral part of dance music of all kinds, jazz, rock and pop, since the beginning of the 20th century, when it was known as the Charleston machine.

Finger cymbals are a smaller version of the pair of cymbals. Because of their low dynamic level they are used very rarely in the orchestra and are constructed in a way that differs somewhat from that of the pair. They belong only loosely to the cymbal family.

Crotales are tuned to a definite pitch and their construction differs from that of the cymbals. For this reason they are not regarded as a member of the cymbal family.

The name cymbal (also cimbel or cymbel) comes from the Latin cymbalum (plural cymbala for a pair of cymbals) which in turn derives from the Greek kumbalon (cup).

Cymbals originated in Asia and are among the oldest percussion instruments. They have always been closely associated with religious worship and rituals (e.g. funeral rites), although they were also used to accompany dances; dancers hung cymbals around their necks on a piece of twine and beat them in time to the music. Cymbals were only ever used in pairs and the playing techniques included single strokes, strisciatti (rotating both plates against each other) and rolls.

A wide variety of cymbals was already in existence in antiquity:

From the Orient to Europe

Cymbals were first introduced into Europe in the Middle Ages by the Saracens, who brought them to Spain and southern Italy. However, at the beginning of the last millennium they disappeared again, probably because the art of hammering had been lost. Despite this, portrayals of cymbals can be found in medieval miniatures up to about the 15th century.

It was not until the 17th century that cymbals returned to Europe, in the wake of the Turkish wars. Turkey had long been famed for the excellence of its cymbal manufacture. The music spread by Turkish military bands (Janissary music) was characterized by noisy and rhythmic instruments such as the bass drum, the side drum, cymbals, the triangle, the tambourine and the bell-tree. European military bands began imitating Janissary music at the beginning of the 18th century.

It was not long before Turkish cymbals began to be scored – albeit very rarely – in the opera orchestra. Christoph Willibald Gluck asked for them in his opera Iphigénie en Tauride (1779), specifically in the Scythians' chorus in Act 1 (cymbals, triangle, side drum). The best-known example of an early use of cymbals is probably Wolfgang Amadeus Mozart's Turkish opera from 1782, The Abduction from the Seraglio (cymbals, triangle, bass drum).

It was in the last thirty years of the 19th century that the cymbals finally established themselves as a permanent part of the percussion section. They were used very effectively by Ludwig van Beethoven (in his 9th Symphony), Georges Bizet (in Carmen), Franz Liszt and Richard Wagner among others.

The modern cymbals of a pair are round, slightly conical plates with a raised dome in the center. In the middle of the dome is a small aperture through which the leather strap is attached. The rim is smooth.

For reasons of tone cymbals are generally thicker in the center than at the rim.

To produce the best possible tone the plate is hammered with special hammers before it leaves the factory. This procedure requires great care and skill because it is very easy to damage the instrument. It is this technique that gives cymbals their typical dented appearance.

Cymbals are made using brass wire, sheet brass, nickel silver or bronze alloys. Just as the type of hammering employed varies from manufacturer to manufacturer, the composition of the alloy used is also a jealously guarded trade secret. One possible alloy used by the famous Turkish cymbal manufacturers Zildjian (Armenian for "cymbal maker") is four parts copper, one part pewter and a quantity of silver.

As a rule notation for the cymbals is written on a single line. Other notation possibilities are:

In the past the pair of cymbals was also notated in treble of bass clef.

The score must always make it clear whether the composer requires a pair of cymbals, or suspended cymbals etc. The decay time should also be indicated.

The cymbal is both vibration generator and resonator.

Sound is produced by striking one cymbal against the other. This causes mainly the rim to vibrate while the center remains motionless. It is these vibrations that produce sound and for this reason the rims of the plates are also struck against each other while they are held by the straps in the center. The cymbal's inherent elasticity and long decay allow the vibrations to develop and produce the reverberation (sustain), the duration of which depends greatly on the alloy, the thickness and the size of the plate.

To avoid creating an air pocket between the plates they must overlap when they are brought together. Should an air pocket arise, the sound is dull and flat.

After the crash – the plates should touch each other only very briefly – the cymbals are immediately held apart, and in most cases the sound is allowed to die away naturally. In some traditions and schools the different parts of the plate are not crashed against each other simultaneously; first the top part is crashed, then the lower (the part furthest away from the musician). The sound is almost that of a grace note.

Because a struck cymbal produces a large number of inharmonic partials a metallic sound results which is also harsh if the oscillation frequency is high. The pitch cannot easily be determined and has the character of noise.

The pitch is determined by the alloy and the weight of the plates, each plate having a slightly different pitch in order to produce a sound rich in overtones. Heavier plates of the same diameter sound deeper. As a general rule, the bigger the cymbal, the lower the pitch.

The plates are struck against each other and separated immediately (which amounts to a glancing blow).

The sustain of notated whole notes or tied notes is not usually damped; the cymbals are held until the note has decayed naturally. If eighth, quarter or half notes are written without a tie the cymbal is damped against the chest to define the proper note length.

For very quiet notes the plates are not brought into full contact; instead only a particular point is struck, usually at the top where it is easier for the percussionist to control the point of impact. This produces a very quiet note, which nonetheless still differs greatly from the sound of the suspended cymbal.

The vibrations are damped against the percussionist's chest immediately after striking. The sound cannot develop fully, which results in a very dry, metallic tone.

The cymbals are shaken against each other, producing an effect reminiscent of a roll. This effect can only be performed mezzoforte or more quietly. Another method is to repeatedly crash the plates very quickly, separating them only very briefly. This can be performed at high volume, too.

Attached to the bass drum

One of the cymbals is attached to the bass drum by means of a special mounting. This cymbal is then struck with the other cymbal. This effect, part of the orchestra repertoire since Mahler, is designed to imitate marching music. Its advantage is that the bass drum and the cymbal can be played with tremendous exactitude because they are both played by the same musician. The disadvantage is the poorer quality of the cymbals' timbre, because the cymbal on the drum is damped somewhat by the mounting. In addition to this, the bass drum cannot be damped quickly, since both hands are already occupied.

It is up to the percussionist to decide whether he plays the bass drum with the right hand and the cymbal with the left (which is more usual) or the other way round.

The scraping of one cymbal over the grooves of the other from the center to the lower rim. This technique produces a penetrating, hissing tone.

A vibrato effect can be achieved by rotating the plates following the attack. This effect is used only rarely, however, because it is scarcely audible and mainly only for show.

Repetitions with or without accents are possible. However, only tempos up to about quarter note = 120 are possible, depending on the size of the plate.

The cymbals have no difficulty rising above the sound of an entire orchestra. It is for this reason that they are used mostly for musical climaxes. In marching music, or in imitated marching music in the orchestra, smaller cymbals are occasionally used to avoid drowning the rest of the instruments.

Pairs of cymbals are used to add a particular timbre to the overall sound of the orchestra, to provide accents and accentuate climaxes.

The instrument's sound is very conspicuous and should therefore be used with care.

Pair of cymbals + other percussion instruments

A good blend of percussion instruments is achieved especially by those with a bright and penetrating sound such as the triangle, tambourine, bells, sleigh bells and castanets.

The combination with the bass drum and other lower percussion instruments (timpani, tom-tom etc.) produces a different, very particular and effective composite timbre.

Trumpets and trombones combine especially well with the cymbal and the timbre becomes more penetrating.