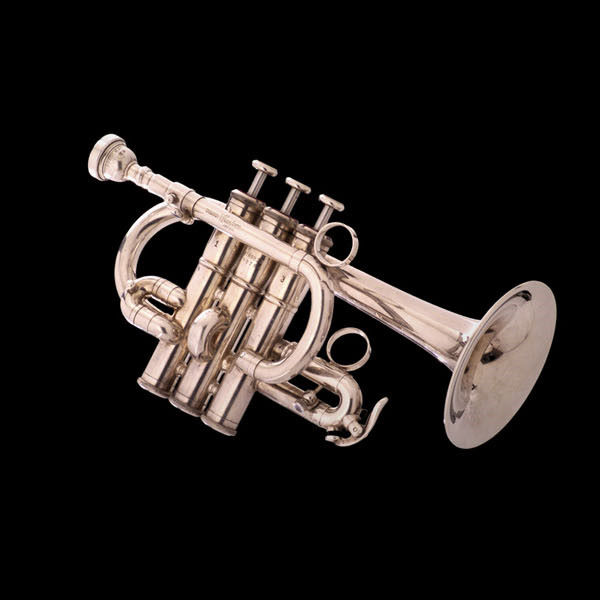 The name piccolo trumpet is given to all trumpets pitched from D through high Bb.

Today, the piccolo trumpet is used for orchestral playing mainly when the trumpet part is permanently in a very high register, e.g. for the performance of baroque clarino parts in Bach and Handel.

In terms of technique the playing of high trumpet parts on the piccolo trumpet cannot be compared to playing them on historical baroque trumpets:

The tubing of baroque trumpets was twice as long as that of modern trumpets - thus the fundamental of a baroque trumpet in C was an octave deeper than today’s C trumpet. Since the air column to be vibrated was twice as long, the instrument was far more difficult to play. In fact, a special clarino mouthpiece had to be used so that the high naturals in the clarino register (from the 8th partial) could be reached at all. The short tubing of modern trumpets and especially the piccolo trumpet means that they are considerably easier to play and that the chances of hitting the high notes accurately are much greater. No special mouthpiece is required. Therefore the performance of high-pitched baroque clarino parts on a modern piccolo trumpet cannot be compared to playing baroque clarino wind instruments. The common description in everyday usage of the piccolo trumpet as the Bach trumpet or clarino trumpet is therefore inaccurate.

Partials whose vibrations are in a whole-number ratio (1:2:3:4:5:6 ...) with each other are called overtones or harmonic partials. The numbering of the overtones differs from that of the partials since the deepest tone, the primary or fundamental, is not counted (fundamental = 1st partial, 1st overtone = 2nd partial, 2nd overtone = 3rd partial etc.). Whereas the fundamental is perceived as the pitch, the overtones merge to form the timbre. Today it is customary to use the numbers of the partials since they correspond with the rations of the wave vibrations.
Lining up overtones one behind the other produces the series of overtones. The overtones are also known as "harmonics". As always in acoustics, the ratio of partials vibrations with each other is given from low to high.
The numerical relationship between the harmonic partials (overtones) was dicovered by Pythagoras (approx. 500 B.C.). Over the course of history they became the mathematical basis of the Western theory of intervals.

High register valve trumpets were first made in the second half of the 19th century so that baroque clarino parts could once again be played.

In the 1880s the German trumpeter Julius Kosleck began playing baroque trumpet parts on a straight-tubed trumpet in A with two valves. From the 1890s, trumpets in high Eb/D and F/Eb were made in Belgium, but failed to gain widespread acceptance - in 1905, for instance, Richard Strauss (1864-1949) recommended the use of metal clarinets in Eb for the baroque trumpet parts in the extended and revised version of Berlioz’s instrumentation theory (!).

In 1905 Victor Charles Mahillon (1841-1925) developed a piccolo trumpet in high Bb with the fundamental Bb3. This instrument achieved general acceptance in the 1960s.

Nowadays many jazz trumpeters try to follow the example of the baroque clarino wind players by pushing the trumpet’s range to higher and higher registers. Cat Anderson and Maynard Ferguson are two of the most influential jazz trumpeters to have reached the heights of the third and even fourth octaves above middle C. Miles Davis and Wynton Marsalis are well-known for their efforts to incorporate elements of serious music into jazz.

Music for the piccolo trumpet in high Bb/A is notated in treble clef. It is a transposing instrument, and sounds either a minor seventh (Bb tuning) or a major sixth (A tuning) higher than written.

Range of the piccolo trumpet in high Bb: D4 - G6

The range of the piccolo trumpet in high Bb is approximately an octave higher than that of the Bb trumpet.

It is not necessary to differentiate between registers because the timbre is homogeneous over the whole range.

As with all trumpets (with the exception of the bass trumpet) the natural harmonic series (scale of partials) is only used from the 2nd partial, since the 1st partial cannot be intoned clearly.

In the low register E4 is reached from the 2nd natural by closing all three valves. By depressing the 4th valve even D4 can be reached. This means that two additional half tones are gained (in the A tuning even C#4 can theoretically be played).

As a rule the scale goes up to G6 (8th partial with the 3rd valve depressed). Trumpet virtuosos can reach even higher notes, but the piercing quality of notes at this pitch is very rarely called for in orchestral literature.

Thanks to the agility of the trumpet runs can be produced very easily.

The piccolo trumpet has a sound which exhibits all the typical characteristics of the trumpet, although it is brighter and clearer than the C trumpet.

The sound is particularly homogenous in all areas and it is not necessary to differentiate between registers since there are no noticeable abrupt changes in timbre between the powerful notes in the lower register and the sharp, strident high notes. The instrument’s easy response means that the full sound is achieved immediately after blowing. The sound develops best between C5 and C6.

The extreme clarity and brilliance of the piccolo trumpet makes it ideal as a solo instrument, but in 20th century orchestration piccolo trumpets of various pitches are often used to flesh out the sound, in unison with the oboes, for instance.

The golden age of high-pitched trumpets was the baroque period. For baroque musicians, the sound ideal was the human voice. The clarino notes, which were extremely difficult to play on the long baroque trumpet, sounded delicate and clear, like a flute, and resembled the treble, the highest-pitched singing voice of the period, more than any other instrument. The baroque clarino notes are the next step in taking the human voice up toward heaven, and thus symbolize man’s striving for God.

In this quest for perfection the art of clarino playing - of playing the highest naturals in the trumpet’s range - was literally carried to new heights.

The clarino playing technique gradually replaced deep military trumpets as symbols of court representation. The higher-pitched trumpets were regarded as refined and noble; clarino playing was associated with high standing and social status, because the musicians played at court - for emperors and princes - and not for the “peasant rabble”.