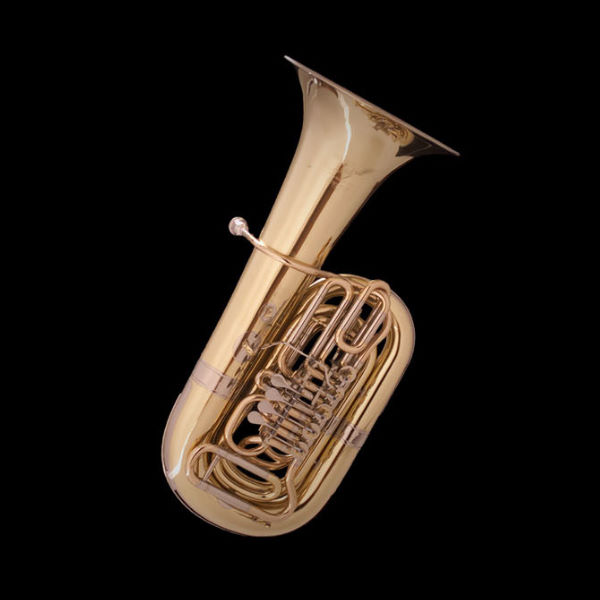 The contrabass tuba is currently made in two tunings: C and Bb. It is used primarily in opera orchestras and in brass and military bands. It is rarely asked for in symphony orchestras.

Contrabass tubas are basically made in two different forms: the tuba form and the spiral form. Spiral tubas are also known as helicons.

The sousaphone was invented by the American composer John Philip Sousa and modeled on the helicon, the first one being made in 1908. The instrument was wrapped around the shoulder for the purposes of marching and was especially well-suited to playing in the open air thanks to its tremendous volume. The tubing ranged in length from 3.6 m to 17 m. The long tubes and oversized bell were really only meant for show.

There is also a great variety of sizes, bore profiles and valve mechanisms.

The bell passes the musician's head either on the left or the right, depending among other things on the type of valves the instrument has: Périnet valves and rotary valves are equally common.

In Austria and Germany contrabass tubas in Bb with a particularly wide bore profile are known as "Kaiser basses".

Also: piston valve. Patented in Paris in 1838 by François Périnet as a further development of the piston valve that was first presented by Heinrich Stölzel in Berlin in 1814. Along with the rotary valve, this is the most widely used brass instrument valve today.

The modern tuba is the result of numerous attempts to make a bass instrument that was capable not only of producing a sound that carried well but also enabled satisfactory intonation. In 1835 Johann Moritz and the trombonist Wilhelm Wieprecht (1802-1872) were granted a Prussian patent in Berlin for the bass tuba. This instrument was made of brass, keyed in F and had five piston valves ("Berlin valves").

The 1st and 2nd valves lowered the fundamental note by a whole tone and a semitone respectively in relation to the key of F; the 3rd valve lowered the fundamental pitch by a fourth, from F to C. The 4th and 5th valves lowered the pitch from C by a whole tone and a semitone (wide half step, wide whole step) respectively. The relatively narrow bore meant that the bass notes were not particularly loud or powerful.

In order to achieve greater volume in the bass several instrument makers looked to Wieprecht's invention for inspiration and started making larger instruments with wider bore profiles. In 1845 the Bohemian instrument maker Vaclav Frantisek Czerveny (1819-1896) made a contrabass tuba in C and F in the town of Hradec Králové. He called the instrument the contrabass and subcontrabass and it found a niche principally in wind band music.

In 1883 Czerveny developed an instrument with a particularly wide bore of around 21 mm. This was the famous "Kaiser bass". The instrument was pitched variously in F, Eb, C and Bb, the shape was either elliptical, helicon-shaped or tuba-shaped, the sound mellow and rich.

At the same time contrabass tubas were also known in Italy; there they were made by Pelliti of Milan and were called pellitones. 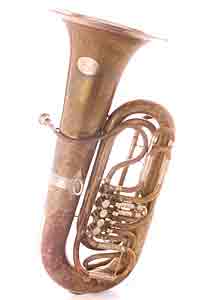 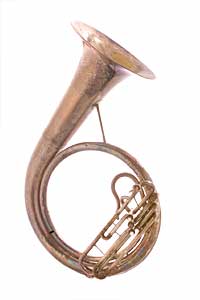 In the USA the instrument maker Conn made the first sousaphone in 1908, an instrument invented by the composer John Philip Sousa primarily for outdoor use. It had a wide bore and was keyed either in Eb or Bb.

The development of modern bass and contrabass tubas tends toward a widening of the bore. 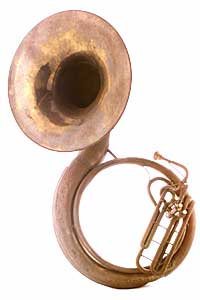 Music for the bass and contrabass tubas is generally non-transposing and written in bass clef. The instrument is pitched in the contrabass register.

In wind band scores notation for the contrabass tuba in Bb is subject to national variations.

In Germany, Italy and England the notation is non-transposing in bass clef.

In France, Belgium and the Netherlands it is transposing, with no accidentals, in bass clef (sounds a major second lower than written):

In Switzerland transposing, in treble clef, no accidentals (sounds two octaves and a major second lower than written):

Range of the Contrabass tuba: A0 - B3

Pedal tones (1st naturals) speak well on all conical instruments, although on large instruments they require an enormous amount of effort on the part of the player. Because of the huge demands made on the breathing, only the fundamental (1st natural, pedal tone Bb0) can be played on the contrabass tuba in Bb, and can be lowered by two steps (Ab0) at most. As a result, a maximum of three pedal notes is available, but these are very difficult to produce and are consequently hardly ever asked for.

The chromatic scale is playable in its entirety over the whole range, with Bb0 and A0 as pedals; all the other notes in the instrument's compass can be played as naturals 2 and above.

As a rule lower-pitched instruments have a less agile and therefore slower response than higher-pitched instruments. It takes longer for the column of air in the tube to respond: the deeper the note, the longer it needs to build up. This applies more to the contrabass tuba than to any other instrument. Tuba players have to compensate for this late response, which they do by beginning their attack prematurely - they must continually jump the gun, as it were, and remain fractionally ahead of the conductor.

A further difficulty encountered by tuba players is the fact that they sit right at the back of the orchestra amid curtains or surfaces that absorb part of the instrument's sound. Their proximity to the timpani has a similar effect, because some of the tuba's overtones are swallowed by the sound of the timpani.

The contrabass tuba's range is the same as that of the bass tuba, which means that all the pieces commonly performed today could be performed by the bass tuba - a Bb0 can also be played on a bass tuba in F, and the lowest notes are equally hard to produce on both instruments. However, the even greater richness of tone and darker timbre of the contrabass tuba mean that it is preferred for parts at this pitch level. When writing for this instrument, composers and arrangers must pay particular attention to the difficulties of sound production - demands made on breathing, length of phrase, changing mutes.

Can be performed with ease in all pitches. The instrument's size means that only stately and solemn sequences are possible, especially in the region of the great octave and the contraoctave. Only moderately fast scales can be played. Even in the upper register it is very difficult to play fast note sequences.

Can be played under certain circumstances but is not called for.

Easily playable but seldom called for.

Trills are possible and can be performed well using the valves. Although the effect they produce is good they are found only rarely in orchestral literature.

Mutes are used to reduce the volume. They also brighten the sound. Sufficient time must be permitted for the insertion of the mute, due to its size.

Legato playing makes great demands on the breathing and for this reason the length of phrases must be chosen with care. Large leaps can be performed very well in legato. The following rule has particular relevance to the contrabass tuba: the bigger the instrument the harder it becomes to perform large leaps. Fast sequences in high registers are difficult to play.

In all registers the tone is richer, rounder and darker than the bass tuba and less metallic than the bass and contrabass trombones.

The pedal notes sound earthy, rumbling and unfathomable; it is difficult to tell what their exact pitch is. These notes are generally doubled an octave above.

The higher notes in this register (from B0-Bb1) correspond to the 2nd naturals and are very sonorous, hearty, majestic and sustaining. It is the notes within this compass that are used most often.

A continuation of the low register (naturals 3 and 4). Below F2 the tone is the typical contrabass tuba sound, above it it sounds like a tuba in F.

Very powerful sound which can easily produce an imbalance in the overall sound when played forte. In this register the tone is rather thick and lacks metallic or brilliant properties. The bass tuba is often used for this range.

The contrabass tuba is a contrabass instrument. One of its principal tasks is the doubling of other bass instruments, usually an octave lower. Especially in tutti passages its role is to provide a firm fundamental bass. Pedal tones are only possible piano and are seldom used.

In especially large brass sections, for example with six or eight horns, two tubas are used, either two bass tubas or a bass and a contrabass tuba.

Played in unison the effect produced by a contrabass tuba with its bass counterpart is not particularly interesting. Played in octaves the sound combination is homogeneous and pleasing, although it can be "dangerous" to do this forte because it smothers instruments in the middle register. A good blend is achieved with the Wagner tubas.

Reverberant chord combinations can be produced together with the trumpets, horns and trombones.

Doubling, also in octaves, of the bass voice (bassoon and contrabassoon).

The sound of the earth, deep underground, when layers slowly shift and cover each other. Sounds that echo in subterranean caves. This sound cannot detach itself from the earth, it remains earth-bound, is heavy. The sound is inescapable, it is as inexorable as a natural disaster once let loose; when it rests it lies heavy over the earth. 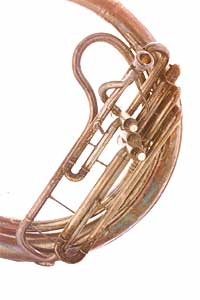 Contrabass tuba in the orchestra

In orchestral music composers only rarely call specifically for the contrabass tuba. It is usually the musician himself who decides which instrument is best suited for the part.