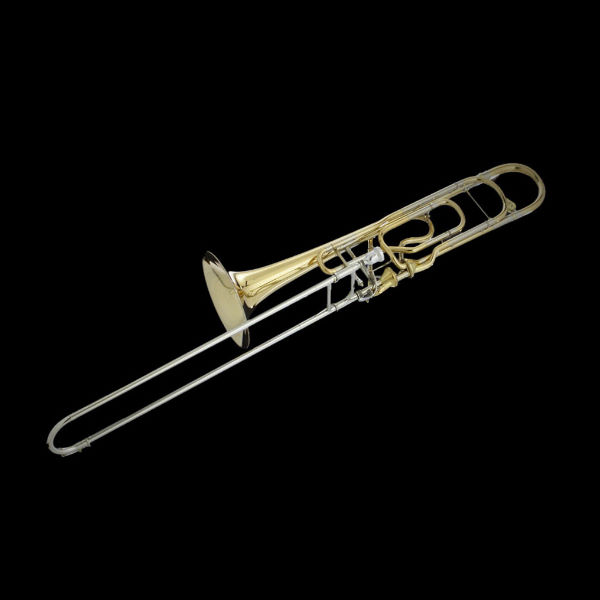 The modern contrabass trombone is a slide trombone tuned to the fundamental of F1 with two valves, which are activated by the thumb of the left hand and make it possible to lower the instrument's pitch from F1 to Eb1 or Bb0 while playing. Opening both valves simultaneously puts the instrument in Ab0. The contrabass trombone is used principally for the great octave and the contraoctave.

In the 16th century there was an octave trombone (trombone doppio = double trombone), which was tuned to an octave below the tenor trombone. The enormous length of the slides (the tube was around 6 m long) meant that only slow playing was possible. Attempts to divide the slide into four parts (a double U), thus halving its length - a single slide movement doubled the length of the tube - had been made as early as the 16th century, but had no role to play in baroque or classical music.

It was this double U system that was called the “double slide” or “double trombone”.

But it was not until 1816 that a double trombone in F was designed by the German Gottfried Weber (and actually made by Halary in Paris in 1830), which shortened the slides to such a degree that they were even shorter than the old bass trombone. This shortening was a significant step forward.

In Berlin in around 1860 C. A. Moritz made a double-slide contrabass trombone in Bb (with no additional valve) for Richard Wagner, who was the first to give the instrument an important role, which he did in the Ring. Composers such as Giuseppe Verdi (Aida, 1871; Requiem, 1874), Giacomo Puccini (La Bohème, 1896), Richard Strauss and Arnold Schoenberg (Gurrelieder, 1911) wrote ever deeper parts for the 4th trombone, which could ultimately only be played by the contrabass trombone.

What all of these works have in common is a large trombone section and vocal parts. The principal task of the contrabass trombone was to provide sufficient volume for a stable and supportive foundation to the four-part trombone section while blending with its homogeneous overall sound, which was something the tuba could not do.

In 1921 Ernst Dehmel used the principles of the tenor-bass trombone to make the improved version of the contrabass trombone which is still customary today: a bass trombone in F1 with two valves (Eb1 and Bb0), which can be opened either singly or together. When both are opened together the pitch is lowered to Ab0 (a fifth plus a major second). In technical terms this combination of the bass and contrabass trombones corresponds to the system developed by C. F. Sattler in Leipzig in 1839. Other valves such as the Eb and C valves have subsequently also gained acceptance. The double slide system is therefore no longer usual today.

Music for the contrabass trombone is written in bass clef with no transposition.
The notation in the upper register is in tenor clef.

The notes in the natural harmonic series that can be played range from the 1st to the 12th natural. Since the 1st natural speaks, pedals can also be produced.

Unlike the tenor trombone, only six positions (slide lengths) are playable when the contrabass trombone is tuned to F1 (valves closed). Each position lowers the pitch of the natural harmonic series by a half tone. Good players can overblow to the 12th natural.

With the Eb valve

With the Bb valve

In the Ab0 tuning (both valves open) four positions are possible:

In the shortest (1st) position the tube length of the F tuning is 386 cm. In the Bb tuning the tube length is 724 cm in the longest possible (5th) position. So when playing the lowest note on the contrabass trombone the musician has to vibrate an air column which is nearly 3.5 m long! Trombones also exist which do not have a Bb valve (fifth-valve) but a C valve (fourth-valve).

The naturals no. 2 go down as far as Gb1 and have more substance than the corresponding pedal notes on the bass trombone.

As a rule the pedal notes are used as well. The pitch of the notes below B0 is no longer clearly identifiable.

These are basically the same as on the tenor and bass trombones, although the contrabass trombone is harder to play.

The contrabass trombone is frequently used for thematic tasks in the contraoctave. Attention must be paid to limitations in the lower register arising from the great demands made on the breathing. Legatos can be performed with ease and a marcato articulation is also possible in low registers. Preparation is required to play the lowest notes. Good velocity possible in the middle register when a fourth-valve (in C) is used: this makes lower positions possible in the low registers.

This staccato technique is easily playable.

Articulation: an R rolled against the front the mouth. The produced sound effect reminds of a drill.

Glissandos are possible over the entire slide length on every natural (up to the 12th), with additional possibilities created by the valves.

Valve trills are possible up to a point, lip trills cannot be performed.

Makes the sound more precise in forte passages and has subtle effects on pianissimo playing.

The sound has a dark and metallic timbre and ranges from a melodious and subdued piano to massive explosions.

Pedal notes speak well thanks to the slightly wider bore. It is the notes in this register that are most often used in the orchestra. The instrument plays the deepest part (4th trombone) in the four-part trombone section, making it possible in orchestral writing to write for a four-part trombone section and include lower pitches. Functions include fundamental bass, thematic tasks, doubling an octave below. Sounds like the bass trombone but more intense.

Smooth transition from this register to the low register. Great intensity.

Corresponds to the tenor trombone's pitch. At this pitch the contrabass trombone is more powerful.

Written as the 4th trombone in orchestral scores the contrabass trombone often plays an octave below the bass or tenor trombone. It is given thematic tasks to perform as well as the fundamental bass in the four-part trombone section (Wagner, Verdi, Puccini, Strauss).

Combines with the tenor and bass trombones to form a polyphonic trombone section.

Trumpets blend well with trombones and give them a brighter sound.

Full and mellow overall sound, the trombone's brassy sound is masked by the horns.

Bass lines are possible in unison with the bass tuba, which has a very different timbre from the contrabass trombone. In Wagner's Ring, in Richard Strauss and in Schoenberg's Gurrelieder it also plays an octave above the bass tuba.

A mute reduces the disparity between the timbres of the contrabass trombone and the bass tuba.

The combination with the contrabassoon and the bass clarinet produces a dark, warm, penetrating sound which is used especially for low bass lines.

The trombone symbolizes the hereafter, the supernatural, hell and the underworld. Its powerful sound is supposed to conjure up images of the terror and unknown dimensions of these realms of darkness. Particularly in requiems (Mozart, Berlioz, …) the trombone section, often large, is assigned the role of evoking the audience's fear of crossing over to the hereafter in the Dies irae and Tuba mirum. The symbolism is therefore religious.

The contrabass trombone's particular power with its metallic elements is reminiscent of archaic brass wind instruments.