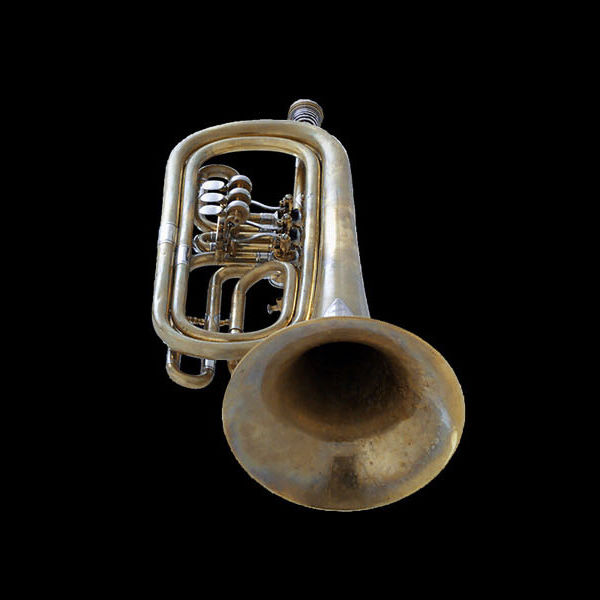 In today's orchestral practice the bass trumpet is played by a trombonist because the instrument's mouthpiece is similar in size to the trombone's.

The above shown bass trumpet is unusual in that it has three valves, like the original instrument made in Wagner's day, instead of four as on the modern bass trumpet.

In 1828 the German instrument maker Heinrich Stölzel became the first to feature a trumpet in (low) Bb in his catalog. The instrument was described as a tenor trumpet in Bb, which was in fact its true register. Richard Wagner (1813-1883) used this low-pitched trumpet in his Ring of the Nibelung to symbolize the fortitude and dominance of his heroes ("sword motif"). He called for trumpets in (low) Bb, (low) C, D and Eb under the name bass trumpet.

In the 1820s Heinrich Stölzel (1777-1844) also made a trumpet in the true bass range, in the F1 and Eb1 tunings. This instrument was adopted by military bands. Today the "genuine" bass trumpet (in F1) is manufactured by the firm of Thein in Bremen, Germany.

The bass trumpet (in Bb1 or C2) is still used by some German bands.

In the symphony orchestra the bass trumpet in Bb1 or C2 introduced by Wagner has always been preferred, although it is used only rarely. The instrument is found chiefly in late Romantic orchestral works by Wagner, Strauss, Stravinsky and Janacek. In the 20th century the bass trumpet was rediscovered by the Viennese composer Friedrich Cerha.

The bass trumpet is notated in treble clef. It is a transposing instrument and is written a major ninth higher than it sounds.

The range is an octave deeper than that of the Bb trumpet.

Between the first and second naturals there is a gap of an augmented fourth. Instruments with four valves can bridge this gap.

The low register of the bass trumpet in Bb also includes the pedals from E1-Bb1. In theory the upper register can extend as far as F5, but these high notes are practically never used and sound much better on a normal trumpet.

Unlike the C trumpet, the naturals 11 and 12 are extremely difficult to produce and are consequently not used.

Can be played with great precision at fast tempi, and at extreme dynamic levels and with dynamic changes in accidentals.

The bass trumpet has a mighty, full and dark timbre, which exhibits the typical trumpet characteristics in all registers.

In the low register it is similar to the timbre of the tenor trombone, although it lacks the latter's warmth and fullness.

Compared to the Bb trumpet, the low register of which corresponds to the bass trumpet's upper register, it possesses far greater dynamic intensity as well as a darker timbre. It was primarily because of the instrument's powerful sound that it was used by late Romantic composers.

Generally the bass trumpet is used in combination with other trumpets and brass instruments, for example in octaves as the bottom trumpet part, as the fundamental note of a trumpet chord or as the highest voice together with trombones.

In Wagner the instrument is also required to play solo passages in all registers.

The enormous dynamic intensity of a note played fortissimo in the lower register corresponds roughly to three trumpets or four horns.

The shape of archaic trumpets - serpentine and large - is associated with magic and rituals on the one hand and military might on the other. The sound comes from the deep.

An examination of the use of the bass trumpet in musical literature leads one to the conclusion that the composers' motives for choosing this particular instrument were not dissimilar. The task of the bass trumpet and its powerful sound is to evoke those ancient instruments and their world, to conjure up the aura of magic that listeners at that time may have felt. The effect is intended to be mysterious and terrifying.