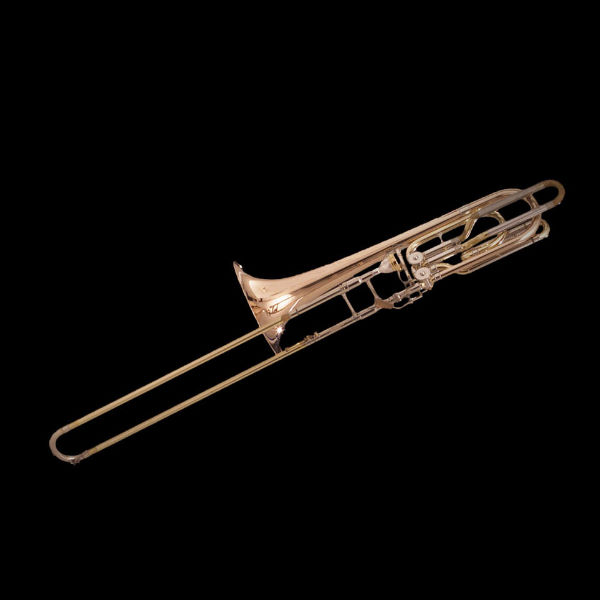 The bass trombone is a slide trombone with two valves that are operated by the left thumb. The valves make it possible to lower the instrument's pitch from Bb to F or D. The entire chromatic scale only becomes available thanks to the thumb valve (F tuning) and an additional third-valve (D tuning). The bass trombone has a very wide range and is relatively easy to play in the lower register.

The history of the trombone's development shows that high-pitched instruments became less important in the 19th century while technical improvements were made on lower-pitched ones.

The Renaissance trombone - first experiments in the bass register

The bass trombone was already playing an important role in the instrument family (soprano, alto, tenor and bass trombone) in the 16th century. The instruments were called the “fourth” (F) and “fifth” (Eb) trombone because of their tunings in relation to the tenor trombone. During the following years the technique of placing a fourth-crook or fifth-crook in the tenor trombone was occasionally practiced to achieve the necessary tube length which would enable the tenor trombone to be used as a bass instrument, as was customary until the end of the 18th century. The maximum slide length of 92 cm (on the Eb bass trombone) and the wide positions imposed severe limitations on the speed of response of these bass trombones in the lower register. The chromaticization of horns and trumpets at the beginning of the 19th century placed greater demands on the bass trombone, and efforts were made to gain greater agility in the region of the great octave and to improve the embouchure.

The valves that were invented between 1813 and 1830 inspired the instrument maker F. C. Sattler of Leipzig to develop the tenor-bass trombone in 1839. He made it possible to integrate the additional piece of tubing (crook) into the U-shaped slide in front of the bell without having to make any other alterations to the tenor trombone. The addition of this piece of tubing meant that bass parts could now be played using the slides of the tenor trombone, in other words greater agility in the bass register was achieved thanks to the closer positions of the tenor trombone's slide. Players could now switch from tenor to bass pitch by means of a valve (fourth-valve or fifth-valve).

From the middle of the 19th century the new tenor-bass trombone replaced the bass trombone in orchestras and has been used as the third trombone ever since, the three-part trombone section having established itself as standard practice.

By the end of the 18th century trombones came in three sizes: alto, tenor and bass. These formed the basis of the three-part trombone section in orchestras. Soon the higher parts were being played by tenor trombones in Bb and the lower parts by a tenor-bass trombone. Bass trombones in F were also used, albeit relatively rarely. Up until the beginning of the 20th century these instruments were made primarily for military bands.

In around 1830, the valve system developed by Blühmel and Stölzel led to the creation of the valve trombone, on which the slide was replaced by valves. Although this instrument evinces great agility it fails to produce the typical trombone sound. It was used for a time in Italian opera in the 19th century (e.g. Verdi's Aida, Troubadour). Nowadays the valve trombone is only found in military and wind bands.

Notation in the tenor and bass clefs, no transposition. All three trombone parts are usually written in tenor clef for the upper register and in bass clef for the lower.

The tenor-bass and bass trombones have the widest range of all wind instruments.

The natural harmonic series from the 1st to the 12th natural is generally used. Pedals are also part of the instrument's range. From the 20th century it has been usual for pedal notes to be played on the trombone. These are especially easy to play on the bass trombone because of its wider bore.

As with the tenor trombone 7 positions (slide lengths) are playable in the Bb tuning (valves closed). Each position lowers the natural harmonic series by a half tone.

Six positions are playable in the F tuning (fourth-valve open).

Five positions are possible in the D tuning (third-valve open).

In the shortest (1st) position the tube length of the Bb tuning (closed valves) is 290 cm.

In the D tuning (third-valve open) the tube length is 563 cm in the longest possible (5th) position. So when playing the lowest note on the bass trombone the musician has to vibrate an air column which is 5,6 m long!

The gap between Bb1 and E2 that exists on the tenor trombone between the 1st position's pedal (Bb1) and the 2nd natural at the 7th position (E2) is bridged on the bass trombone with the aid of the fourth-valve and third-valve. The instrument is thus rendered fully chromatic. The problematical notes B1 and C2, which would not be playable with a fourth-valve alone, can be sounded easily and well by operating the third-valve. These notes were called for in older scores and could be played with ease on the old bass trombone.

When the valves are closed the same playing techniques apply to the bass trombone as to the tenor trombone.

A microtonal pitch fluctuation possible in passages at any tempo and at all dynamic levels; vibrato can be played in virtually any context, from pp to ff and from slow to fast.

Articulation: an R rolled against the front the mouth.

All the missing notes can be sounded by using the slide. This practice first emerged in America at the turn of the 20th century and has slowly found its way into symphonic orchestral practice by way of jazz.

This is possible both ascending and descending. The maximum extent is a diminished fifth (the interval between the 1st and 7th positions). The glissando can be played on every partial, although it is not possible to change the partial while playing it.

While the slide is descending (over a maximum of three positions), the glissando is moving upward in contrary motion. This is very difficult to perform.

On the trombone, the trill is one of the less refined sounds.

Produced by rapid alteration of lip pressure and only possible between two neighboring partials of the same series. Only whole tone trills between D4 and D5 are possible.

Rapid alternation between two neighboring positions. The intonation is rather wayward and only possible as far as the 4th or 5th position. Half step trill without rearticulation.

Makes the sound more precise in forte passages and has subtle effects on pianissimo playing.

Each interval of the same series can be played by slurring.

In general the slightly wider bore of the bass trombone lends it a somewhat darker timbre and fuller sound.

Bb0 - Bb1
Easy attack thanks to the slightly wider bore.

F#4 - F5
The highest notes are somewhat harder to play than on the tenor trombone.

The bass trombone is notated as the 3rd trombone in orchestral scores and often plays the tenor trombone's lower octave or the contrabass trombone's upper octave. Its sound is effective in multiple octave combinations as well as the fundamental bass.

The metallic trombone sound is masked by the horns. 1 trombone = 2 horns when the written dynamic levels correspond.

Since it shares its dark timbre with the cello, the double-bass, the bassoon and the contrabassoon it combines well with those instruments. The bass trombone is the carrying instrument, however, the bassoon or cello merely add color.

The trombone symbolizes the hereafter, the supernatural, hell and the underworld. Its powerful sound is supposed to conjure up images of the terror and unknown dimensions of these realms of darkness. Particularly in requiems (Mozart, Berlioz, …) the trombone section, often large, is assigned the role of evoking the audience's fear of crossing over to the hereafter in the Dies irae and Tuba mirum. The symbolism is therefore religious, as it has been in opera, too, since Monteverdi (Weber's Freischütz).